Karl, the Landgrave of Hesse-Kassel, Found Bessler’s Wheel was Easy to Understand.

When I began my biography about Johann Bessler, I had already completed several years research into his life, acquiring many documents, as well as much additional information from historic records, and I decided to publish everything I had found, concentrating on evidence provided by Bessler himself, and as much as possible from witnesses.  I hoped to provide enough of an incentive to persuade others to seek Bessler's solution.


I believe that Bessler fully intended to sell his machine if at all possible, but he seemed right from the beginning, to think that he might have to accept post humous acceptance, which is why he left as an alternative enough clues so that some one later, after his death, could still discover his secret.  To that end I was certain that Bessler would not have included any lies about his machine although he definitely wrote ambiguously at times.  Lies could be challenged by a purchaser of the wheel, after the event, and Bessler sought acceptance to higher social circles, through the sale of his machine. Lies, would not help either in the sale nor its aftermath.

As for the evidence of the eye witnesses, obviously they could not see inside the machine but they did their best to provide descriptions as accurately as possible.

It has therefore puzzled me from time to time to see many valiant, determined efforts to replicate Bessler's wheel, while undoubtedly making erroneous assumptions or just discounting some evidence that we can assume was accurate, in order to complete their designs as they saw them, or according to their pet theories.

I refer, for instance, to the frequent declaration that Bessler's wheel had eight weighs.  Where did this figure come from?  There is the letter to Sir Isaac Newton in which Fischer von Erlach describes the "sound of about eight weights landing on the side towards which the wheel turned". But this refers to the Kassel wheel, capable of turning in either direction and requiring a gentle push in either direction to start rotating, and which gradulally accelerated to full speed.  Fischer spent at least two hours with the wheel and could only say that there were about eight weights.  We can only speculate about the examination, but I'm sure Fischer attempted to define exact;y how many weight he could hear landing, and yet he couldn't be precise, which suggests that there was a lot of distracting noises occurring at the same time.

Let me explain why this eight weight assumption is wrong; let us return to Bessler's first two wheels which were only able to turn in one direction.  They were able to begin rotation as soon as the brake was released.  Not only does Besssler tell us that these two could begin to rotate spontaneously as soon as the brake was released, but we also know that many spectatorres were encouraged to screw a bolt in and out to slow or bring the wheel to a halt, by simply making the end of the bolt rub against the side of the wheel, and unscrewing it to release it to allow it to regain full speed.  The wheel did not require a push to start, it started spontaneously.  But why did Bessler invent a wheel which could turn in either direction?  To answer the accusations from some people that the wheel must have been wound up.  Bessler believed that the two directional wheels would answer that criticism.

He set out to design this two way wheel and it has always seemed to me that the first and most obvious solution might be to set two wheels, linked together on the same axle, to see what would happen, but with one set to drive the wheel in the opposite direction to the first one.  Obviously this would remove the spontaneous start, but perhaps a push might set them of spinning, and depending on which direction the push was given might provide accelerating rotation.in that direction.

But here is another assumption which Occam's Razor would appear to rule out. Suppose there exist two explanations for an occurrence. In this case the simpler one is usually better. Another way of saying it is that the more assumptions you have to make, the more unlikely an explanation is. So when I see people ignoring the simplest explanation for the design of the two way wheels, by suggesting some clever mechanism which would allow both directions from one set of weights I'm extremely sceptical.  Why complicate what may be a simple solution to the two way wheels?

The eight weights applies to the two-way Kassel wheel; some weights may have been padded to remove or reduce the sound of their impact; this means there may have been one more for eac direction; this could add up to five weights for each direction, not four.  Bessler even admits to adding felt on his earlier wheels to deaden the sound they made. For someone today to be designing a one-wheel with eight weights is therefore illogical; designing a two-way wheel before you've designed a successful one way wheel is also illogical. 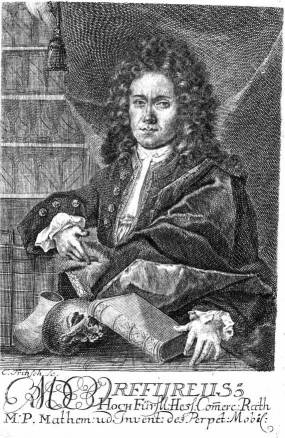 After more than thirty years he died in poverty.  He had asked for a huge sum of money for the secret, £20,000 which was an amount only affordable by kings and princes, and although many were interested, none were prepared to agree to the terms of the deal. Bessler required that he be given the money and the buyer take the machine without verifying that it worked.  Those who sought to purchase the wheel, for that was the form the machine took, insisted that they see the secret mechanism before they parted with the money. Bessler feared that once the design was known the buyers could simply walk away knowing how to build his machine and he would get nothing for his trouble.
This problem was anticipated by Bessler and he took extraordinary measures to ensure that his secret was safe, but he encoded all the information needed to reconstruct the machine in a small number of books that he published. It is well-known that he was prepared to die without selling the secret and that he believed that post humus acknowledgement was preferable to being robbed of his secret while he yet lived.
I became curious about the legend of Bessler’s Wheel, while still in my teens, and have spent most of my life researching the life of Johann Bessler (I’m now 72).  I obtained copies of all his books and had them translated into English and self-published them, in the hope that either myself or someone else might solve the secret and present it to the world in this time of pollution, global warming and increasingly limited energy resources.
It has recently become clear that Bessler had a huge knowledge of the history of codes and adopted several completely different ones to disguise information within his publications.  I have made considerable advances in deciphering one of his codes; the simplest one, and I am confident that I have the complete design.  Due to unfortunate family circumstances I am currently unable to complete the build I have undertaken but shall return to it as soon as possible and I sincerely believe that 2018 will see the reconstruction of Bessler’s wheel.
Johann Bessler published three books, and digital copies of these with English translations may be obtained from the links to the right of this blog.  In addition there is a copy of his unpublished document containing some 141 drawings - and my own account of Bessler’s life is also available from the links.  It is called "Perpetual Motion; An Ancient Mystery Solved?"  Bessler published three books; "Grundlicher Bericht", "Apologia Poetica" and "Das Triumphirende..."

For some ideas about Bessler’s code why not visit one of my web sites at www.theorffyreuscode.com
One last thing.  Perpetual Motion machines have been utterly proscribed and Johann Bessler’s claims ridiculed - however, it seems that more than a handful of scientists have now come to the conclusion that it might theoretically be possible to design a mechanical system which is continuously out-of-balance and therefore will turn continuously using the repeated fall of weights for energy.  Gravity but not directly.  These open-minded people remain tight lipped for now, awaiting proof of their hypothesis.
JC
By John Collins at May 03, 2018 68 comments:

Suppose You Succeed! What’s Next?

What will you do if you succeed in building a device which is based on the same concept as Bessler’s wheel, or appears to be similar?  I kno...