The Meaning of the Apologia Poetica Wheel.

What I love about this blog is the way it has transmogrified into a kind of catch-all discussion group which occasionally mentions the subject heading but then meanders off into various side issues.  But hey, I don’t worry as long as people keep commenting and we get some useful exchange of views.
There has been much discussion over the value of Bessler’s clues and, dare I say it, ‘fake clues’. My own efforts don’t seem to have garnered much interest but plenty of scepticism, but in my opinion they are real, not fake.
I have been asked many times for examples of the clues I claim to have found and deciphered, so even though some of them are available on my other websites I’m going to post several here from time to time, in the hope of generating some interest. I’m not going to show those that give too much away to start with, but I plan to share them all as my efforts to replicate Bessler’s wheel proceed - and I do have a design I’m working on.
There is a multitude of pieces of coded information, buried in this publication, Apologia Poetica, but the Apologia wheel drawing at the end of this book interested me initially because it looked so simple and because of the intriguing and mysterious hint in the accompanying text, “Jesus said, ‘do ye still not understand?’ 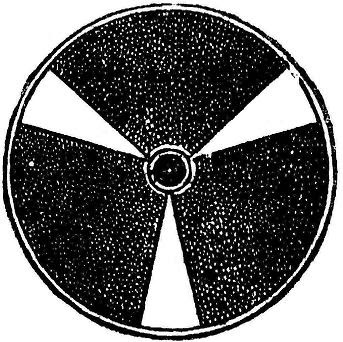 I measured the angles at the inner end of the white segments and discovered, as others have found, that the angles are ambiguous – a bit too vague to measure accurately. I noted that the angles in the white segment formed a point outside the inner circles and that the black segments did not in fact form any measurable angle unless you extended them to a point which came somewhere beyond the centre of the wheel.
Due to the way things were printed in those times the exact sizes of the angles were difficult to establish.I felt that there must be another reason for the inclusion of this diagram with its cryptic comment above, and Bessler must have made allowances for the irregularities of the printing techniques of his time. If he knew that the angles would be hard to measure then perhaps the exact measurement did not matter, but it seemed safe to assume that all three angles were equal. I measured the white angles again and established that they were variously somewhere between 23 degrees and 27 degrees.
I added together each set of the same three numbers forming each of the three angles to see if the sum of the three numbers had any meaning. Using the angles as measured between 23 and 27 degrees, I ended up with several possible totals between 69 and 81. I divided the resultant totals into the 360 degrees of a circle and there was just one number which divided equally into 360 and that was the first real advance in deciphering Bessler’s code.
Three times 24 degrees comes to 72, and 360 degrees divided by 72 is 5. A circle, which can be divided by five, is a pentagram or a pentagon (a pentagram is a pentagon inscribed within a circle). So, I decided that Bessler might be indicating that his wheel had five divisions, which might indicate the use of five mechanisms – or it was a clue to further decipherments.
During my research I have discovered that Bessler rarely, if ever, missed an opportunity to include two or more hints or ways of deciphering a clue, within each item that held a clue and the above Apologia wheel is no exception. For those who remain unconvinced that the above diagram does indeed hold a hidden pentagram the following will go some way towards convincing them of this fact. 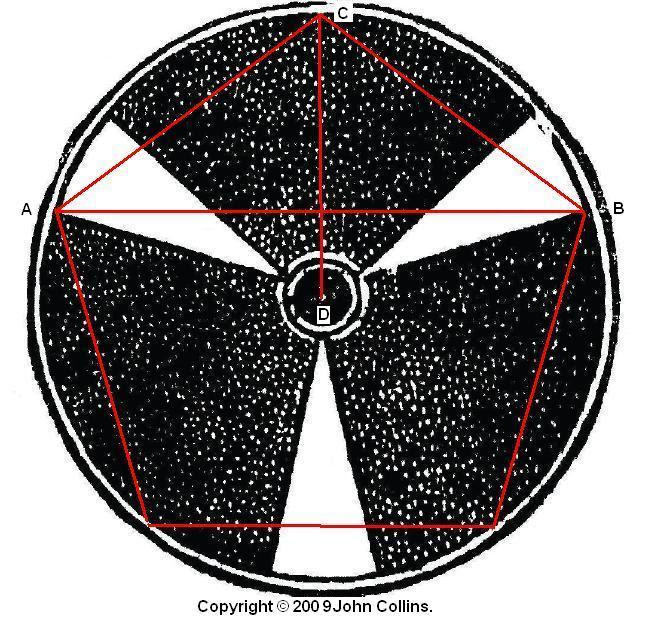 The above drawing is virtually self-explanatory. Draw a line from ’A’ to ’B’ as in the drawing. Drop a perpendicular through the centre of the wheel from ‘C’ to ‘D’. The length of the chord from ‘A’ to ‘C’ and also ‘B’ to ‘C’ is equal to one chord of a pentagram. Using a set of compasses set to the length of the first chord, simply fill in the remaining chords to complete the pentagram. Examples of this system of double clues abounds in Bessler’s work and is a way of confirming what initial findings appear to indicate.
There is an additional clue hidden in the curiously drawn axle in the centre of the Apologia wheel. It consists of a white dot denoting the centre, surrounded by a solid black circle. Surrounding this in turn is a white circle which is itself surrounded by a thin black circle and finally another white circle but one divided by three terminations of the three white segments. Just decoration? No.
In the next figure notice the same red lines as in the drawing above. First I drew the red horizontal line (as AB above). Next I drew in the two almost vertical red lines, which begin at the lowest corners of the bottom white segment and rise, deliberately skimming the edge of the inner black circle. Note that they meet at the upper edge of the circumference, indicating the same point as ‘C’ does in the above figure. This allows you to draw in the two upper arms of the pentagon 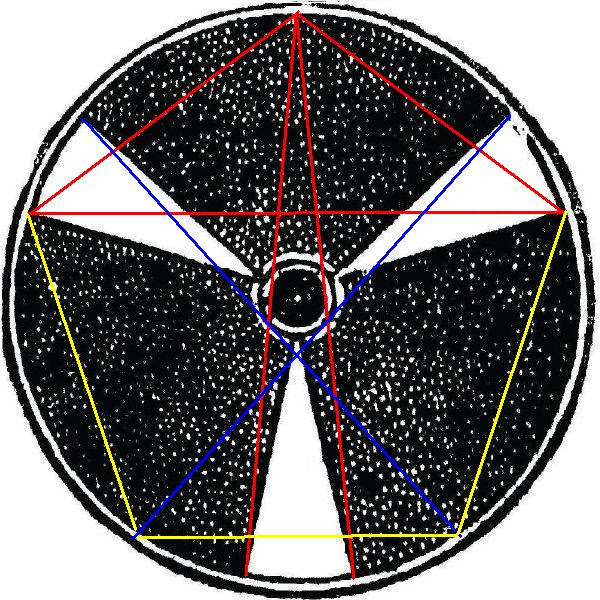 This not only explains the reason for the elaborate centre circles but also proves the presence of the pentagon. He gives us three ways to decipher the meaning of this wheel; once with the three 24 degree angles, numerical, and twice with different sets of geometrical lines defining the pentagonal feature.
Earlier I mentioned the curious quotation from the Bible which accompanies the Apologia wheel, “.... and Jesus said, do ye still not understand”. The implication is that there is something to be understood which is not readily apparent to the eye. It will be noticed that the quotation is from the Bible and takes the form of a chronogram. Chronograms were particularly popular in Germany in this period and were often used on buildings to establish the date of their construction.

Taking the several Latin uppercase letters D, I, D, V, C, C, V, V, D and I, from the first line of the quotation, and assuming they also represent Roman numerals, added together they total the figure 1717, the year of AP’s publication. D = 500, I = 1, V = 5, and C = 100. It will be noticed that the last line of the quotation has a couple of blanks, easily ignored but which represented omitted letters. The missing word is in fact, ‘teufel’ meaning ‘devil’. The letter ‘U’ and the letter ‘V’ are interchangeable in German so, applying the same technique as above and replacing the letters with numbers where possible we get ‘teVfeL’. Using the V and the L, indicates the number 55 - the number 5 again but repeated this time.
Returning to the wheel diagram, there is the numerical pointer to the number 5, plus two geometrical features pointing to two 5s. This mimics the two 5s in the missing letter blanks in the quotation. This next is arguably coincidence, but the year 1717 can be read as 17 x 2 which equals 34 degrees, one of the main angles in a pentagram.
This is such an ingenious way of transmitting information, and is typical of the rest of Bessler’s clues. What information is he offering? To me it is obviously the basic wheel needs to have five segments, and the duplicated number 5 relates to the two way wheel, but it may also to mean 5 weights in 5 segments, or two sets of 5 weights!
These clues, with my interpretations, seem a lot more convincing than others which have been published.  I have strived to find and unravel clues which are simple to see and understand.  My solutions are logical and it seems to me that it is the solution I offer which is received with scepticism not the way I deciphered it.  This example above suggesting the importance of the number 5 is widely dismissed and the reason seems to be because  Fischer von Erlach described hearing the sound of about eight weights landing on the side towards which the wheel turned, in the Kassel wheel.  But the sounds were muffled by other noises, there could have been more of them in a two way wheel, and some could have been muffled or silenced.
JC

I received an email today with a design which the sender believes is how Bessler's wheel worked. I studied it with my usual care but as usual found little to get excited about. I lost my hard drive last year and although I recovered all of my documents, unfortunatley I was unable to save my emails since 1997! This was a tremendous blow because I reckon I had in excess of a 100 perpetual motion designs sent to me over the years.

As it happens, none of them would have solved the problem of Bessler's wheel but I always live in hope that someone will come up with the answer one day.

I still have an amazing collection of designs snail mailed to me from when I used to have my PostBox address on line. Again they are wonderfully drawn and show an impressive imagination but all would remain resolutely stationary if they were built.

I hope this trend to design would-be perpetual motion machines continues because I'm a firm believer that when the solution is found it will come from the 'little guy' working on his own in his work shop. Maybe some one like me or you perhaps?