Following a question abut Karl's birthday card I decided to post images of the only item I have which I assumed the posted comment referred to.  Although I have had this item for many years I have never attributed anything of significance to it although it is a curious document.

I contains large number of Chronograms each of which seem, as far as I have investigated, point to a particular year, usually the one in which the item is inserted.  Each one has a bible reference attached which I assume contains the quotation that Bessler used.

That is all I can say about the document but I am curious to know if anyone else sees more within it that is apparent to me.  It will be useful to post it here for anyone to return to should the need arise.

I was unable to arrange them in a more compact manner so they are central but in order from first page to last, top to bottom. Clicking on each page will give you a large version.

I’m posting the Legend of Bessler’s wheel again because I’m going to be working hard on finishing my reconstruction of Bessler’s wheel.  It’s been a busy year with little time to spend in my garage where the build should have been happening, but time is racing by and I must concentrate on finishing the job.  My apologies for promising fewer blogs but the sooner I finish it the sooner I can publish everything.

Please feel free to comment if you wish and I will try to check back daily. So here it is again,

The Legend of Bessler's wheel.

Karl the Landgrave of Hesse permitted Bessler to live, work and exhibit his machine at the prince's castle of Weissenstein.  Karl was a man of unimpeachable reputation and he insisted on being allowed to verify the inventor's claims before he allowed Bessler to take up residence  This the inventor reluctantly agreed to and once he had examined the machine to his own satisfaction Karl authorised the  publication of his approval of the machine.  For several years Bessler was visited by numerous people of varying status, scientists, ministers and royalty.  Several official examinations were carried out and each time the examiners concluded that the inventor's claims were genuine.

Over several years Karl aged and it was decided that the inventor should leave the castle and he was granted accommodation in the nearby town of Karlshaven. Despite the strong circumstantial evidence that his machine was genuine,  Bessler failed to secure a sale and after more than thirty years he died in poverty.  His death came after he fell from a windmill he had been commissioned to build.  The windmill was an interesting design using a vertical axle which allowed it to benefit from winds from any directions.

He had asked for a huge sum of money for the secret of his perpetual motion machine, £20,000 which was an amount only affordable by kings and princes, and although many were interested, none were prepared to agree to the terms of the deal. Bessler required that he be given the money and the buyer take the machine without viewing the internal workings.  Those who sought to purchase the wheel, for that was the form the machine took, insisted that they see the secret mechanism before they parted with the money. Bessler feared that once the design was known the buyers could simply walk away knowing how to build his machine and he would get nothing for his trouble.

For some ideas about Bessler’s code why not visit my web sites at www.theorffyreuscode.com

This problem was anticipated by Bessler and he took extraordinary measures to ensure that his secret was safe, but he encoded all the information needed to reconstruct the machine in a small number of books that he published. He implied that he was prepared to die without selling the secret and that he believed that post humus acknowledgement was preferable to being robbed of his secret while he yet lived.

It has recently become clear that Bessler had a huge knowledge of the history of codes and adopted several completely different ones to disguise information within his publications.  I have made considerable advances in deciphering his codes and I am confident that I have the complete design.

Johann Bessler published three books, and digital copies of these with English translations may be obtained from the links to the right of this blog.  In addition there is a copy of his unpublished document containing some 141 drawings - and my own account of Bessler’s life is also available from the links.  It is called "Perpetual Motion; An Ancient Mystery Solved?"  Bessler's three published books are entitled "Grundlicher Bericht", "Apologia Poetica" and "Das Triumphirende...". I have called Bessler's collection of 141 drawings his Maschinen Tractate, but it was originally found in the form of a number of loosely collected drawings of perpetual motion designs. Many of these have handwritten notes attached and I have published the best English translation of them that I was able to get. Bessler never published these drawings but clearly intended to do so at some point.

Kreuz Means the X in Storksbill/Pantograph.

In a recent blog I posted a small coded clue, thinking that if anyone had a go at it they would need help in solving it.  Wrong!  One anonymous person got it quite quickly.  The clue was  an anagram, which looked like this.  “Karl’s next mobilizers sunk.”

The solution was this, “kreuz means x in storksbill"


So what does this mean?  When I published Apologia Poetica my translator suggested Kreuz meant crossbar, as there were literally dozens of potential meanings available depending on the required meaning and he could not think of anything more suitable. But actually the basic translation is “cross”.  Knowing Bessler’s propensity for offering clues which are vague or have more than one meaning and with no apparent reference to other things, it took me a while (about 30 years!) to make the connection.  The X's also known as “crosses” are a basic component of the famous “storksbill” or “pantograph”. Some shown in red and some in yellow as below. 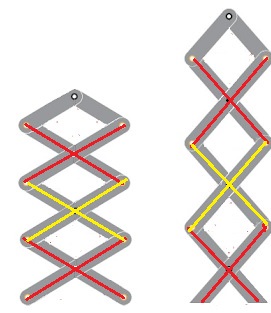 When Bessler says that when he used just one cross, the wheel scarcely moved (paraphrased) but when he added more it turned, he simply meant that you needed more than one.

This seems to me to suggest that although the pantograph mechanism was used, it was a small part not requiring a lengthy travel, just more than one link. He possibly designed it as one rectangle without an X to begin with and then adapted it as he saw fit.

He also takes the opportunity to throw in the information that he used cords and pulleys as well as weights. If you study my version of the “Toys” page (first published here on Wednesday, 16th January 2013) you will see that I've divided each component of 'A' into five equal parts.  The divisions run across the page to include the scissor mechanisms.  The line including the top of 'A' and 'B' division includes three pieces of scissor mechanisms, but only two complete X's.  This I believe was done because he identified the parts of the scissor mechanisms with the X for purposes of confusion, but although there are three complete pieces of scissors, there are only two X;s, hence the suggestion he needed more than one. 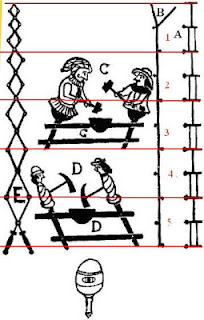 Note the inherent suggestion that there are only five mechanisms required, as claimed by myself and hinted elsewhere and everywhere in Bessler's work.