In 1720 Johann Bessler is recorded as having made a hydrostatic balance for Johann Adam Cass. I have included a picture of it, as it still exists in the Landesmuseum in Kassel. I don't know how much of the whole instrument was down to Bessler, but looks well made. 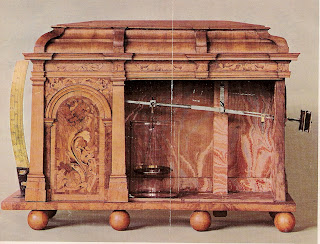 This picture is from a book written by Henri Michel, called "Scientific Instruments in Art and History" Viking 1967.  He writes:-

"The balance shown here was made in 1720, by Johann Ernst Elias Bessler (1680- 1745), (known as Orffyreus, and notorious for his "Wheel" or perpetual motion machine) for the military engineer Johann Adam Cass of Kassel".

There is also a picture of the same instrument in "Die Naturwissenschaftlich-Technischesammlung" by Ludolf Von Mackensen (Kassel: George Wenderloth Verlag, 1991).


It will be recalled that Johann Adam Cass was a witness and one of the signatories and chief examiner of the Gera wheel. It seems that he moved to Kassel shortly after Bessler, to be in charge of military engineering there there.
In 1720 Cass published a book called "Neu verbesserter Ingenieur" which means "New Advanced Engineering", In 1722 he published "Nouveau corrige ou par des demostrations guide de l'ingenieur à la veritable mathematique",meaning "New or corrected by demonstration, Engineering Guide to mathematical truth". These publications were sponsored by Karl, the Landgrave.
The hydrostatic balance was a frequent component of perpetual motion designs and is still sometimes introduced as part of the mechanism.  Bessler seems to have included them in some of his Maschinen Tractate designs

I have also included the concept in my own designs from time to time but in the end I prefer the simplicity of weights, but are we denying the potential benefits of a the hydrostatic balance?  I don't think so.