In 2010 I updated my web site at www.besslerswheel.com to include what was then my latest thinking about Bessler’s wheel.  Now, thanks to a comment on this blog, almost ten years later I returned to my site to read what I had written back then, and I’m pleased to note that it is not too far from my current thinking in a general sense.  The swinging technique described there was not intended to imply that swinging was a necessary part of the mechanism, but I was looking for clues as to where and when to apply force to the wheel to make it turn and I used the actions of getting a swing started and accelerated to identify the best positions.

I introduced the sport of kiiking from Estonia, which, it seemed to me might have some useful input to the question of how Bessler’s wheel worked. In Estonian, ‘kiik’ means ‘swing’. In kiiking, the swing arms are made of rigid steel to enable a person to swing through 360 degrees passing over the pivot bar of the swing.  The person swinging is fastened to the seat by their feet in order to support them as the swing goes upside down during one complete rotation. In order to swing he (or she) begins to pump it by alternately squatting and standing up on the swing. The swing gains momentum and can rotate right around the pivot bar.  It is a competitive sport in Estonia and the person who succeeds in completing complete revolutions with the longest shafts is the winner. 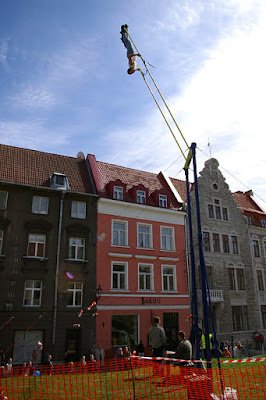 Here is a link to the above town provided by PLMKRN with thanks
https://www.google.ee/maps/@59.4354789,24.7438651,3a,90y,111.62h,117.79t/data=!3m6!1e1!3m4!1sX5PX_yUhCNDf2vJpajZVAQ!2e0!7i13312!8i6656
My theory was very simple, too simple compared to what I now know, but nevertheless I think it was fairly well argued considering it was done over ten years ago.  All the weights weigh the same and there are five mechanisms for reasons I explained on the web site.  Each mechanism has two weights so there are ten in total.  These facts still apply to my current design


But now there are several alterations and additions which include the use of scissor mechanisms, cord and pulleys.  The fact that some of these are included on the 'Toys' page implies that they are required in some way but it is not as straightforward as many have assumed - and it is not as mysterious as others would have you believe.

In my opinion, fascinating as the Maschinen Tractate (MT) is, it was originally designed as a teaching aid to be used in his Fortress of Wisdom for the education of his young apprentices in the arts and skills required in the local industries of that time.  I believe that the final pieces of information which he had intended to teach to his pupils would include how to build his perpetual motion machine.  So it would have contained full details of how and why it worked. Because of the arrest he was panicked into removing the final pages but I no longer believe that the 'Toys' page was added to replace them, I am convinced that this page was intended to be part of the whole MT.  This document too, originated from a wood cut, therefore it must have been constructed long before the arrest.  He would not have had time to create the wood cut and print it on paper, I can only surmise why he had made that page, but I think Bessler must have intended to include it within his MT, perhaps to tease his pupils with hints and clues.

To me the whole document appears to be the basis for discussion within his classrooms and that is why it includes some obviously incorrect drawings.  He intended to ask his apprentices if they can see why this or that won't work.  So what does the 'Toys' page tell us?  More on that in a future blog, but note that some of the pages in MT are not numbered but have a block ready for a number to be added, except for 'Toys' page.  The preceding page numbered MT137 also has a block but it is too big for just a number so I believe it has a bit more than just a number attached.

Just for fun here is a little clue.  It is well-known, but it has been misinterpreted and is quite important. Unfortunately I have disguised what it says!