Proof of Pentagram in the Merseburg & Weissenstein Drawings

I have indicated the presence of a pentagon embedded within the two drawings of the Merseburg and Weissenstein Castles many times over several years. It has been pointed out to me recently, that ‘any geometric figure could be revealed by someone else who might draw lines on that Merseburg wheel drawing and get a hexagon or an octagon out of it!’
I think that’s a reasonable comment, although I don’t think that has happened yet. But I can provide convincing evidence that the pentagon/pentagram was deliberately included by Bessler, and with no other geometric design intended in those particular drawings, maybe that would help to focus people’s minds on the reason why.
Back in November 2021 I published a blog entitled “The Toys page, 137, 141 and 47 and the Freemasons”. Amongst other things I talked about the 47th proposition of Euclid and the Pythagorean theorem. I did not offer a link to Euclid’s 11th proposition which I now do, it was in fact ....
“ To inscribe an equilateral and equiangular pentagon in a given circle….”
I’ve abridged it somewhat to simplify my point. A diameter line is first drawn across the circle, in our Weissenstein version it is that line I call the padlock line running downwards from point A.
A second line is drawn from the upper end of the padlock line, point A,  to the opposite circumference, point C in Euclid’s construction below, forming an 18 degrees angle.  That one in the Weissenstein drawing I call the ‘rope line’
A third line is drawn from the same point, to the opposite circumference, point D in Euclid’s construction, again at an angle of 18 degrees but on the opposite side of the padlock line from the rope line.
A line is drawn between Points C and D.  Angle CAD is 36 degrees (2 times 18 degrees) and angles C and D are twice the angle at A, 72 degrees.
“Let ABCDE be the given circle.
Set out the isosceles triangle FGH having each of the angles at G and H double the angle at F.
Inscribe in the circle ABCDE the triangle ACD (blue) equiangular with the triangle FGH, so that the angles CAD, ACD, and CDA equal the angles at F, G, and H respectively. Therefore each of the angles ACD and CDA is also double the angle CAD. 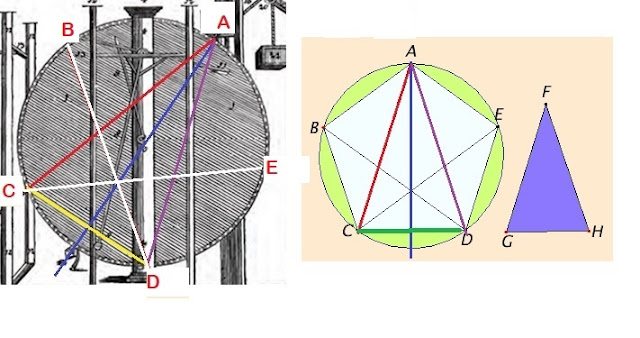 The blue line exists as the padlock line from A. Although it isn’t in this particular construction it is used in alternative constructions.
The red line is the rope line A to C.  These two are 18 degrees apart. This should spark the thought of a pentagon on its own.
The purple line A to D is also 18 degrees from the blue padlock line. These two angles total 36 degrees, another hint at the presence of a pentagon.
The yellow line C to D matches the green one and is aligned with the hatching lines in the wheel drawings.  Just in case you think that you B and E should also align with the hatching lines, you’re right they should, but I did not measure the bisected angles when I drew this with my mouse, so on the Weissenstein drawing my positioning was slightly out - but it doesn’t affect the conclusion.
The two white lines, DB and CE bisect the angles at ACD and ADC to provide the final two points of the pentagon.
Remember every single angle in the pentagram is a multiple of 18.  Hence there are these angles 18, 36, 54, 72, 90 and 108.
Also the letter ‘R’ is the 18th letter of the alphabet.  It also forms a major part of Bessler’s logo and his initials, J for Johann, to become R through the ROT13 cipher.

To summarise. The two lines of interest in the Bessler wheel drawings are the rope line and the padlock line.  These two lines form the basis for suspecting the presence of the pentagon. They’re 18 degrees apart.
JC.
© John Collins 2022
By John Collins at July 24, 2022

The Solution Lies within the Existing Documents.

We should return to the task in hand and leave aside the dubious benefits of Remote Viewing, we need to trust only what we know.  We can onl...