The purpose of the waxed linen covering and pivot points

Bessler is said to have covered his wheel with waxed-linen. Considering this fact led me on an interesting mental ramble.

The German words used to describe the cloth covering in Das Triumphirende is leinwand which means canvas/linen/fabric. The other German words used are überzogen, which means  covered/drawn-over; and äusserlicht meaning external/outside.  OK, but in the Latin text he uses the words linteo = linen, cerato = waxed, and vestito = covered/clothed.  So I'm assuming it was waxed linen or canvas.

When I build a test model, I fix everything to a single disc, mounted on a free-spinning axle. The disc is made of medium density fibreboard (MDF) and I can drill holes and fix pivot points and add stops easily.  The only difficulties arise if I need a lever to pass over the top of another pivot point, or another lever with a weight attached to the end.  In those cases the pivot point has to be made shorter to allow the passing lever to pass over it and not get stopped too soon.  It's a bit like watching the hour hand pass over the minute hand of a clock, the hour hand has be nearer the clock face than the minute hand, so it can easily pass over it.

This is all fine and well until you wish to build a more substantial model that will do work - or you need to exhibit it and wish to cover the inner workings.  The obvious thing is to attach another disc to the axle to cover the mechanism and this requires all those pivot points to be attached at their outer ends to the new disc.  Those pivot points that you shortened now need to be repositioned because if you don't they will obstruct the passage of the other lever you had designed to pass over it.  It takes time and trial and error to achieve the new positions without affecting the continued operation of the mechanism and these new positions explain, for me, some of the mysteries about Bessler's drawings. 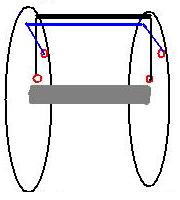 As for the waxed linen, I think the purpose of using it to cover the sides of the wheel was to hide any clues the spectators might get from seeing the placing of the various pivot points and other fixings.  Without the covering of the waxed linen the positions of all the pivot points would be visible to the examiners and therefore potentially offer clues as to their purpose and action.

Also, he is said to have introduced a flap in the cloth which gave him access to the interior so that he could remove the weights prior to moving the wheel from one support to another.  But here is another mystery.  To get all the weights out, or at least to get all the weights he could reach, out, he would surely need several flaps?  They couldn't have all been accessible from one position in a twelve foot diameter wheel.  He must had to lock and unlock the wheel as he removed the weights otherwise it would spin until balanced again.  Maybe he had one flap at each weight access point?  It is a pity nobody counted the flaps.

But ... he might have accessed the weights by unbuttoning the edge of the linen, then he wouldn't need a special flap.