The ideas floated for driving Bessler's wheel, other than using the force of gravity include some other, pretty off-the-wall ideas.

My favourite is the put-put boat.  It is a toy with a very simple steam engine without moving parts, typically powered by a candle or vegetable oil burner. The name comes from the noise made by some versions of the boats.

Technically it is a thermodynamic self-oscillating toy dating at least from the 1880s. The toy was very popular in the early 20th century, but is no longer readily available except on the internet probably because it must be made of metal, while most toys today are plastic.

The putt-putt works by heating (usually with a candle) an internal tank filled with water and   connected to submerged exhausts. It is usually easy to adjust the heat so that the water level will self-oscillate.

As water is alternately blown out and sucked in through the exhausts, the boat moves forward with a
noisy vibration that gives the toy its name.  Below is a typical example, not dissimilar to one I made when I was a kid. 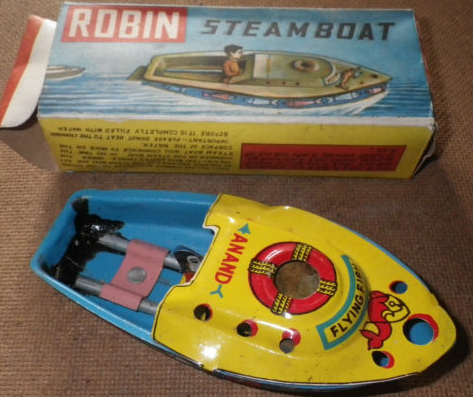 There are no moving parts and only a candle to heat the water; brilliant!

THere are a lot of web sites dealing with the making of such toys among them this one http://www.sciencetoymaker.org/boat/ and of course wikipedia https://en.wikipedia.org/wiki/Pop_pop_boat

It has been suggested several times to me that Bessler found a way of adapting the technology to drive his wheel, but I came to the conclusion many years ago that it wasn't possible.  The nearest thing to this would be Ovvyus's ambient temperature changes used to drive it, and I remain unconvinced of that too.