How did Bessler Build his Wheel?

As I have said before, I use a disc of wood to attach the various mechanisms and the whole is mounted on a slim axle, but this is not the answer that Bessler could have used.  My method results in a flimsy construction incapable of carrying out the tasks Bessler's did.  His method required the construction of a framework as depicted in my original biography about him., see below. 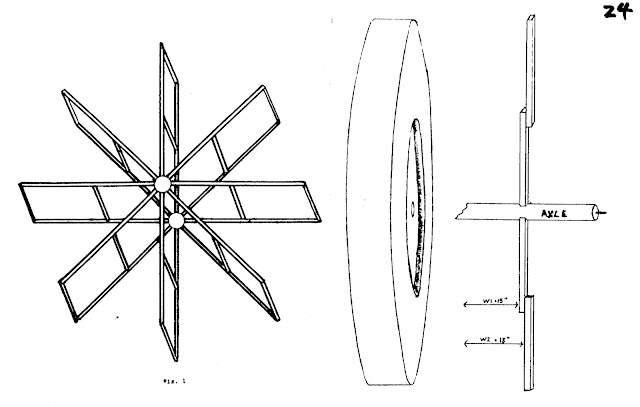 In my original sketch I included eight divisions but things have changed since then.  In the first place I envisaged, and still do, two separate wheels, one a mirror image of the other, designed to turn the Kassel wheel in either direction.  There might therefore have been a need for only four radial struts; one set for each direction that the wheel turned.  Subsequently I proved to my own satisfaction that there were in fact five mechanisms operating inside the wheel and therefore five radial struts required for each direction of the wheel.

The initial framework might have stopped at the half way point, as shown in the illustration above, allowing access easily to the areas close to the axle.  The rest could have been added later to complete the construction. I read somewhere, but I forget where that the thickness varied from 15 to 18 inches on the Kassel wheel and I have shown why this might have been necessary above right.

The axle makes an interesting study.  Six inches in diameter and six foot long; using a wood weight calculator I found the weight to be estimated at between 50 and 100 pounds dependant on whether it was pine or oak, and there are many other possibilities using other woods, but the weight is significant.  There must have been some kind of support for the axle before he even began, unless he used a vise to support it and hold it still.  A hundred pound axle would be a heavy object to manoeuvre around and I think it likely that he made a work-bench designed to hold it in position while he worked on it.  But the six foot radial arms would become a problem because it would need the support structure to hold the axle six feet above the ground, otherwise the ground would interfere, unless he then added to the final section of each radial arm at a later stage., so I lean towards the three foot segments as the way to begin work on it.

Another thing is the positioning of the three-quarter inch bearings.  Any one who has had a bike will be familiar with the way the wheel can become wobbly.  How Bessler managed to build his wheel without any reported wobble because the wheel was slightly out of true was an achievement in itself.

How were the radial struts attached to the axle? Perhaps he used dowels sunk into the axle and subsequently used them to provide an attachment.  Or maybe there is a clue in the two drawings below, taken from his "Das Triumphans.." 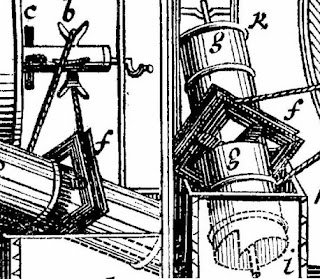 The square box-like structure lends itself as a means of attaching to an axle.

Just some thoughts about the problems he faced building such a large structure on his own.