This is a brief account of the odd numbering used by Bessler in labeling his two wheels, the Weissenstein one from Grundlicher Bericht and the second one the Merseberg wheel from Das Triumphans. For simplicity I shall refer to them as the W wheel and the M wheel.

By the way, click once on either illustration to get a large version to see the numbering more easily. 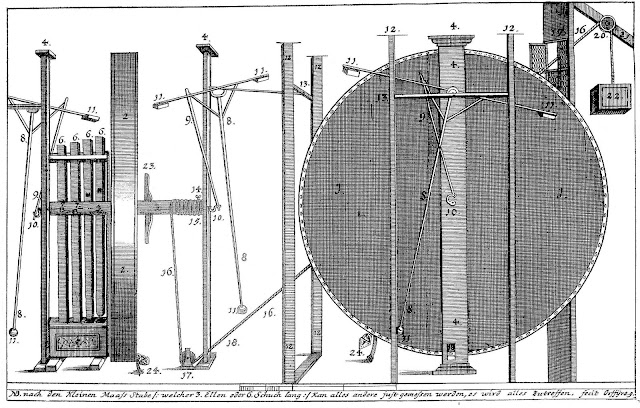 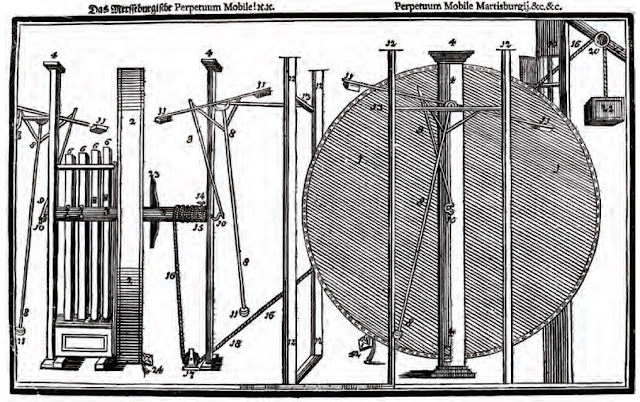 It becomes quite clear that some of the items are ‘over-numbered’.  By that I mean that Bessler seems to have labelled the parts with a particular number more often than one might think was necessary. For example the main pillar supporting the wheel is numbered 4, four times.  The slimmer pillars are numbered 12, and two of them to the left are numbered twice each, yet the other two are only numbered once each. Some numbers appear more often than others and not just because they are attached to more similar pieces. After number 18 the rest of the numbers are lone examples. I speculated that this was done to achieve a certain total, and having identified each part once with its number, he then sought to add to the total by labelling the same parts more than once. Obviously the higher numbers would make the jumps toward his desired total too big so he started at the lower end of the range and gradually added numbers until he had achieved his desired end.  Why he did this was unclear to me at the time.

The omission of 5 and 18 in the W wheel is explained by the fact that 5 is the most important number to Bessler because of its importance to the pentagram, and 18 degrees is the basic angle of the pentagram.  Changing the number 24 to 42 can be explained by the omission of 18, because 42 - 24 = 18.  Bessler ensured we got this information by altering the second drawing.  First he removed the 5 and an 11 (5 x 11=55).  Then he assumed that we would compare the two drawings and realize that the second one not only omitted these two numbers, but also when totalled the numbers add up to 633, whereas in the M wheel the total is 649.  But of course 633 from 649 equalled 16 (5 + 11).