A deal to attempt to limit the rise in global temperatures to less than 2C has been agreed at the climate change summit in Paris after two weeks of intense negotiations. The pact is the first to commit all countries to cut carbon emissions, and nearly 200 countries took part, and it would come into being in 2020.

On the face of it exciting and encouraging news, but of course it's full of holes and let outs.  I don't need to go into these nor list the major states which were, understandably, reluctant to sign up to a condition that they feel could hamper economic growth and development.

Although I remain unconvinced that this is a man-made problem and not a natural turn of events, I accept that the pollution caused by the current fossil fuel consumption is undoubtedly a cause for concern.  So the search is intensified to find an alternative source of energy and one that could be applied anywhere on or in the planet earth.

Below, smog in Beijing caused by industrial pollution. 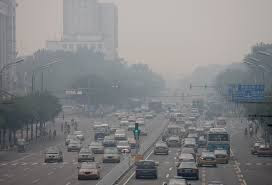 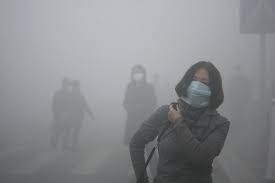 On my way to Rome a couple of years ago, I had to change planes at Amsterdam and a plane came in from Beijing.  The passengers queued to catch an onward flight and everyone of them wore the smog masks as you see above.  I asked one of them why and he simply said, "we must".  I told him he was OK here in Europe and didn't need to keep them on and he just smiled and shook his head.

I saw an interview with Anote Tong this week, who is the President of Kiribati, an island republic in the Central Pacific, comprising 33 coral atolls stretching along the equator. It is one of the first countries in danger of becoming uninhabitable owing to climate change.  Because atolls are naturally low-lying, and have a high ratio of coastline to land area, they are especially vulnerable to sea-level rise and storm surges.

President Tong's message was that we should not be thinking of this is a problem for the future, his country is feeling the first effects of global warming now. With most of its land only a few feet above sea level, Kiribati has already seen growing damage from storms and flooding. Some of the nation's uninhabited islets have even vanished beneath the Pacific.  Global warming threatens to render Kiribati unliveable well before it is completely submerged. If global warming continues at today's rates, rising ocean waters may shrink Kiribati's land area, increase storm damage, and threaten its freshwater reserves.   He asks that everyone should be concerned and seek any kind of alternative energy source.  Solar panels and wind turbines are all very well but they cannot hope to replace fossil fuels as an energy source, we need something more basic, more universally usable and available in the very, very near future.

I know that we still have an enormous vertical cliff to climb to convince the world at large that Bessler's wheel did work and perhaps it might ultimately hold the key to reducing industrial pollution.... and maybe not, but surely it's worth trying. The wheel must be proven to work first, then it's up to the design-engineers to find ways of upscaling the basic model.  Bessler said bigger and more powerful wheels could be made and we have no evidence that he would have misled us about that, nor can I think of why he would have done that.  We must take him at his word.

How utterly amazing would it be to successfully reconstruct Bessler's wheel and then find that the entire world had taken the technology and developed it and found that this 300 year old machine had solved the problems of the 21st century!