This particular piece of encoding is another one whose legitimacy is hard to argue with but although its purpose may seerm vague I believe I have the right answer.  Again it is to be found in the wheel drawing from Das Triumphirende. 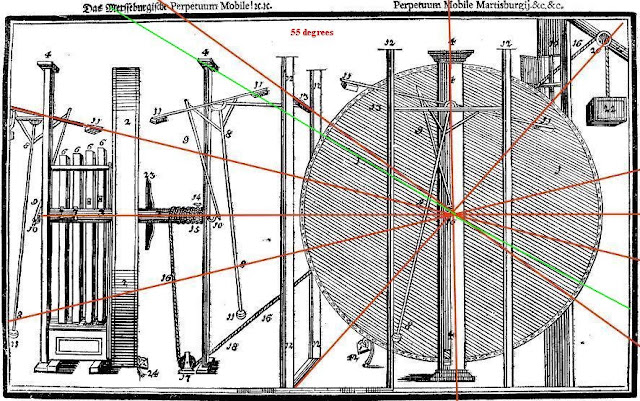 Initially I simply tried marking in the lines of perspective which ran through the centre of the wheel.  Starting from the bottom left side of the central supporting column, I extended the line which connects the bottom end of the two columns numbered 12. Continuing in a clockwise direction, I drew a line linking the two number 8 weights, then the straight horizontal line.  The next line we have already encountered; it marks one of the pentagonal points on the far side of the wheel. I extended the line which connects the tops of the same two columns numbered 12 and finally the vertical line down the centre of the main column.

Twelve to six, three to nine, one to seven, eleven to five and ten to four all followed lines of perspective.  The only one that did not follow a line of perspective was two to eight, but interestingly the line exactly lined up the two number eights attached to the weights.

So extending all the perspective lines available to us, which cross in the centre of the wheel, provides us with a clock face.  Using this we can divide up the picture and therefore the numbers by twelve.  Remember in my previous blog I mentioned dividing the total of all the numbers by twelve?  To recap, 649 = 59 x 11, add the missing 11, making 60 x 11=660, the clock hints at 12, and 660 divided by 12=55!

New comments are not allowed.