In his last and most professional-looking publication, ‘Das Triumphirende…’ (produced in 1719), on page 144, Johann Bessler included a logo-like doodle that at first sight seem attractive to the eye but meaningless.  But there is more to it than meets the eye. I have reproduced it enlarged so that it is easy to see the features incorporated with in it.  The logo is composed of a crown with some curious lettering beneath, some of which on closer inspection looks like the word Orffyre which was Bessler’s name according to the atbash cipher and before he latinised it.  There is some additional lettering reversed on the left side of the middle circle.

If I transcribe the letters into modern font it will be easier to read.  It says:-
HTARORFFYRE, which, when the left side is reversed, reads RATH ORFFYRE.  This means COUNCILLOR ORFFYRE.

Below that there are 5 letters evenly spaced, which might stand for Doctor of Mathematics, Medicine and Perpetual Motion, attributes he claimed for himself, or possibly Music in place of Mathematics.

Knowing of Bessler’s propensity for using numbers and letters substitution in various ways, I was sure that the logo contained hidden information, and the key to solving this innocent looking code could be found. One of his favourite puzzles used alphanumerics and the above is easy to read.  If D is the fourth letter of the alphabet then applying the same principle to the other letters gives  4 + 12 + 12 + 15 + 12  = 55 (again!) But that cannot be all.

Here is one of those curious, easily dismissed anomalies I have spoken of previously.  Notice the ‘P’; it does not look quite right. Is it upper case or lower case?  If lower case then the upper curved portion is too big; if upper case then the downward portion should not extend below the line of text. Which ever is the intention it should be upper case because the other letters are.  But why are the letters YR above the letter 'P'  conjoined? Is there more to this than just producing five letters or at least five letters if you include the YR as one letter. 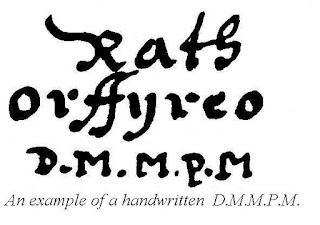 In this example the 'p' has a tail similar to the letter 'q' when hand written.  However it might also be also be a 'j' or some other letter, and these puzzles can be read to provide what ever answer you seek!  Notice that in the hand drawn picture Bessler has put the letter 'O' at each end instead of in the middle as in the first logo but this is not as good at providing the link to the two way wheel as the first logo does. 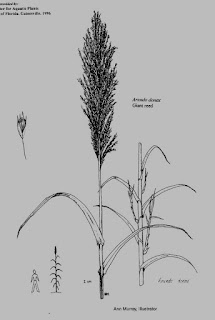 As for the other features of the logo, the crown represents Karl, the ruler; Rath Orffyreus tells us that Bessler was a counsellor under Karl; the D.M.M.P.M. tells us, in my opinion, that he was a self-proclaimed, Doctor of Mathematics (or Music), Medicine and Perpetual Motion; the number 55 tells us that he was telling us of the importance of the number 55.  Finally, the leaf design is similar to the leaves of the Arondo Domax giant reed, which is commonly used in Organ Pipes of that period, and still is today for that matter.  This is a reference to Bessler’s skills in organ building.

I am leaning towards the letter 'M' standing for music since  Bessler's later connection with organs seems to be more suitable, and of course there are examples of his musical notation for the carillon he was hoping to build one day for another prince, Karl I, Duke of Brunswick-Wolfenbüttelf.

One more item.  This a close up of the centre of the logo, and something that Bessler often used in placeof his signature.....