Johann Bessler had Five Mechanisms in his One-Way Wheels

I may have mentioned this once or twice before (!) but it’s a recurring bone of contention with me that researchers trying to find the solution to Bessler’s wheel, continue to stress the importance of having eight weights.  This is usually in a design using eight mechanisms.  I have tried over the years to point out that the only reference to eight weights occurred in Fisher Von Erlach’s report to Sir Isaac Newton about his two hour examination of the two-way wheel in the Landgrave of Hesse-Kassel’s castle.  The words used were ‘about eight weights were heard...’. Given that the examination lasted for two hours one might have expected von Erlach to be more precise about how many weights he heard.  This implies that the sounds he heard were confused by the presence of a lot of other noise.

We know from other witnesses that the rotation of the wheel was accompanied by considerable noise, and we also know, because he said so, that Bessler deadened the sound of some falling weights with felt.  It is also worth noting that Bessler frequently expressed concern that people might somehow find out how his wheel worked and it seems perfectly understandable and reasonable that he would take steps to disguise any sounds coming from the wheel which might give a clue to someone with a discerning mind.  He could have added an extra weight designed to fall with a loud noise but no mechanical advantage/disadvantage, or he might have sound deadened one or more.

Some people have claimed to be working on a two-way wheel from the start, why would you even consider that?  The logical place to begin is surely with the one-way wheels as Bessler did.  He only researched the two-way wheels to try to disprove the accusation that his wheels were clockwork driven.

So we know that about eight sounds emanated from the two-way Kassel Wheel.  We don’t have any description of the sounds coming from the one-way wheels apart from the fact that they were noisy. So is there a way of discovering the minimum number of mechanisms required in the simpler one-way wheels? I say ‘simpler’ because Bessler complains at the difficulty he had in getting the Kassel wheel to work, because it was a more complex design.

There are clues which in my opinion reveal the number of mechanisms required.  Most people are aware of Bessler’s inclusion of the pentagram in more than one drawing.  They may also be aware of the numerous pointers to the number five in his name, pieces of text and other places too numerous to mention.  I have included below, some details from the ‘Toys’ page but there are many more examples where Bessler includes broad hints that there are five mechanisms in his one way wheels. 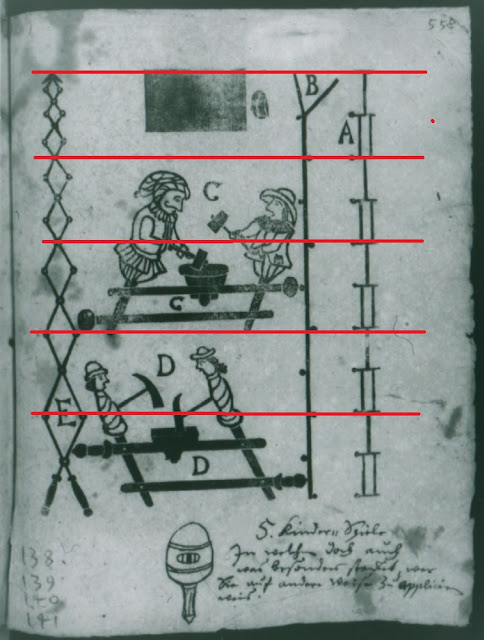 Notice that I have separated the items in the part labelled A by drawing red lines across, revealing that there five pieces of identical mechanisms. Part B looks similar but twisted and it too has five parts. Items C and D look roughly the same as each other and they bear similarities to each part of item A.

I should also point out that Bessler has added his usual alphanumeric clues by labelling the items A, B, C, D and E - and letter E also represents five, and not content with that, he labels the hand drawing as a number 5, when it should be labelled F,  This gives him his number 55 or 5 and 5.

I should point out that the order of the letters is deliberate and to read the clues correctly we must start with A and move through tto F and don't forget the spinning top labelled 5.

I don't want to say anything more about the Toys page other than that it contains almost every clue you need, to know what parts are required for his wheel, although the exact configuration is not obvious.