The Number FIve and Phi and Bessler’s Wheel.

Over the last few years I have posted many pieces of encoded material along with my interpretation of what they mean, but none have been of help in finding the design inside Bessler's wheel.  Not posting anything that might be of help was, I admit, a deliberate move on my part for two reasons; firstly, to try to interest others in looking, finding and interpreting other pieces of code, but secondly to retain for my own benefit anything which I believed would help me to find the actual solution.  What follows is a little bit of information which could lead to discovering some of the requirements of the wheel. There will be more to follow.

Because of the presence of the pentagram in many of Bessler’s drawings and his apparent obsession with the number five and 55, it’s been a bit of an obsession of mine too, to try and find some information  concerning these apparent clues, that would be helpful.

The number five is intrinsically related to Phi and the Fibonacci series. Phi represents the Golden Ratio, 1.618 and in the Greek alphabet looks like this, ⏀.

You can start the Fibonacci series from 0 or 1, and starting from 1 the 5th letter is 5, and the 10th letter is 55 and outside of the Fibonacci series the numbers 1 to 10 total of 55. Bessler uses these numbers in different ways in several of his drawings.  The square root of 5 = 2.236 although there are at least 10 billion digits after, according to Wikipedia, despite  that, a close approximation can be achieved by 161/72 which gives 2.23611. Curious how 72 shows up there, being as it is a fifth part of the pentagram.

Nearly every angle inside Bessler's wheel is based on the angle of 18 degrees, the smallest angle used in the pentagram.  Others include 36, 54, 72, 90 and 108, all multiples of 18, except one which is 30 degrees.  All the angles including some covering angular movement not normally required for a pentagram are also derived from the angle of 18 degrees.

Although Bessler stressed the need for five mechanisms it is clear that he also considered using the odd numbers 7 and 9. This gave him the alternative to fit more of them into the wheels without compromising the effectiveness of the wheel. To fit more mechanisms inside his wheel would require them to operate further out from the wheel’s centre, and make them smaller. But given the huge size of the Kassel wheel, that might have been an option he chose to make. Despite it being almost the same diameter as the Merseberg wheel it only turned at half the speed which might be because it contained more smaller mechanisms, with reduced length of movement in those parts which were designed to move.

Having 7 or 9 mechanisms might help support the idea that the witness, Fisher von Elach, did hear the sound of ‘about’ eight weights landing on the side towards which the wheel turned.  In Bessler’s Maschinen Tractate document you can see that some drawings are numbered in an individual way, and have a special characteristic which the others don't have and you can read more about it on my web page at
http://www.theorffyreuscode.com/html/mt_numbers___letters.html
Those numbers above 50 which contain the number 2 show the 2 as a Z rather than a 2, but only if they are odd numbers.  So in the numbers 52, 72, and 92, the 2 is appears as a Z, but all the remaining numbers use a curved number 2.  Notice that number variants start after number 50, this supports the notion that a minimum of five mechanisms are necessary. 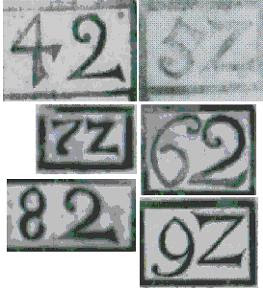 I can't prove any of this until I have working model, but I firmly believe that the single number 5 denotes five mechanisms, and the 55 denotes two weights in each mechanism.  So in the above image the odd numbers mean you can use 5, 7 or 9 mechanisms, and the Z-like 2s can be read as 2 - or two horizontal Roman numerals, V, representing 5, something Bessler does in numerous other examples.  He also uses the letter W to convey two 'V's or 5s.

There are other implications in the above text which I have not touched upon which may help others to make progress in discovering some of Bessler's construction details.