The Möbius Strip and Bessler’s Wheel.

I recently posted a little piece about my search for potential clues to Besser’s wheel, among ancient symbols, in particular the yin yang symbol.  Another of my favourites, not so old but intriguing nevertheless, is the sign for infinity in mathematics, the lemniscate. It has the appearance of a sideways figure eight, and although there are variations they are all similar.

This was introduced by John Wallis in 1655, and although he did not explain his choice of this symbol, it has been conjectured to be a variant form of a Roman numeral for 1,000 (originally CIƆ, also CƆ), which was sometimes used to mean "many", or of the Greek letter (omega), the last letter in the Greek alphabet, can also mean, infinity.

Lastly and most fascinating of all is the Möbius strap or band.  A simple device to make; take a long rectangle of paper or just a longish strip,nd join one end to the other, but put a half twist in before connecting two ends. I don’t want to bore you with all the quirks attached to this remarkably simple design but you can find plenty of information on the internet.

The interesting point for me is the apparent similarities to be found between the infinity symbol and the Möbius band. Admittedly the lemniscate doeasn't usually have a half twist in the path of the strip but I have seen some drawn like that and I wondered of the artist got confused or was it just an additional twist! 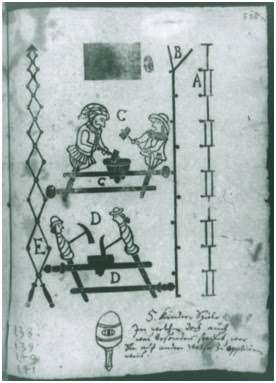 Note the lower pair of figures labelled 'D'.  are shown in spiral or twisted design whereas the upper pair labelled  'C', are in straight stripes.  I've always wondered if that is meant to convey that the lower pair have a half twist in their relative positions somewhat like the infinity symbol of even the Möbius band?

I did try to manipulate my drawing of the figures 'D' to demonstrate what I meant but it ended up just confusing, so if anyone wants to try their hand at it I'll gladly post their pic here if its better than mine! So the right half of the ‘D’ figures needs turning up side down and flipped horizontally to complete the spiral move. To me the spiral is suggesting a upside down move as well as a horizontal flip.

This is not necessarily the right explanation but it needs some kind of examination and it has the typical look of a Bessler clue.

I believe I have discussed some of this many many years ago but I can't remember where or when, so apologies if we have been here before, but I definitely didn't associate the Möbius strip and the infinity symbol together along with the figures 'D' in the Toys page at that earlier time.

There may be some way of introducing Möbius-like mechanical configurations into Bessler's wheel?