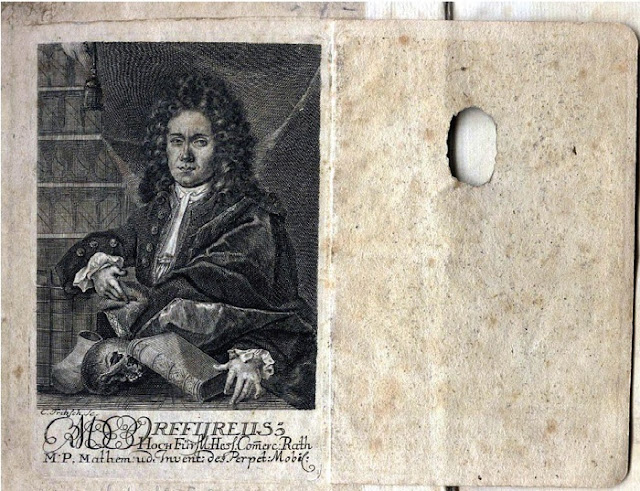 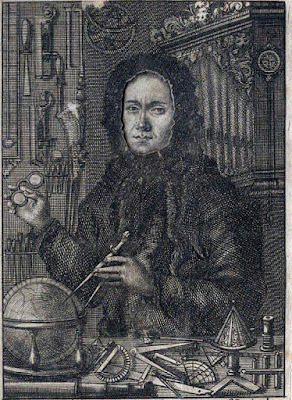 In his epic book, Das Triumphirende... (DT) Johann Bessler placed in the frontice-piece a portrait of himself which contained a few items, skull, jar, books - normally representative of a well known Latin phrase, ‘memento mori’ meaning, ‘remember, you must die’.  Also linked to this idea is another Latin word, ‘vanitas’, meaning ‘vanities’; artworks exploring this theme usually contain books, wine and musical instruments, and with the former reminding us of our mortality, the transience of our lives and the futility of pleasures.  Books were also included in the main portrait. These ideas were much discussed in in religious circles in Bessler’s time when this life was believed to a preparation for the afterlife.

However, Bessler included a second portrait of a person in a completely different setting.  This second portrait had had the face most carefully excised with almost surgical precision, allowing Bessler’s face to peer through, as if he was also the person the second portrait.

As far as I have been able discover there are only six copies of DT still in existence, each  containing the two portraits with the missing face in the second, but there are another dozen or so which have also survived but they do not have this unusual additional portrait.

We can make some assumptions about these portraits. Firstly we read on the first page that copies of the book were 'Printed at Kassel in October 1719, and published by the inventor himself, from whom bound copies may be obtained atWeissenstein Castle'.  There were several printers available who were busy printing books, tracts, adverts and music manuscripts.  I considered the possibility that Bessler did his own type setting but concluded that he would not have been allowd to.  Printers were busy and had to schedule time for each project and Bessler's book was 168 pages long with drawings included, plus the two portraits.  Half of the text was in Latin, which Bessler understood perfectly as Christian Weise, his famous teacher, taught in Latin as did most teachers of that time.  So the whole book could have been completed more quickly and accurately in the hands of an experienced printer.

Weise was one of the first teachers in Germany to change to teaching in German rather than Latin, but not until after Bessler had left and he describes himself as one of Weise's favourite pupils, whether that was his imagination or not, he did change his name once he had discoverd the perpetual motion, from plain Ernst Bessler, to Johann Elias Ernst Bessler, perhaps an acknowledgement of his debt to Weise whose own son was called Johann Elias Weise.

Given that Bessler probably had the printing done by a Kassel printer, a woodcut of the mystery faceless person who was installed in front of Bessler's portrait may have been provided by that printer.  This would require someone to do the portrait of Bessler with head and shoulders to the same size as the mystery guest so that he could fit inside accurately.  I'm not sure if there were many copies of the mystery person, but I would have thought it would be quite simple if the printer had retained the woodblock from a previous order, to print extra copies.  However Bessler may have found the task of including perfect versions of the two portraits in his book as being too time consuming, to complete more than say half a dozen.