I would like to remind anyone who reads this, about the state of my poor granddaughter, Amy Pohl.  She had a brilliant career ahead of her before she was struck down by the most debilitating of diseases for which there seems little chance of a cure.  But Amy is a real fighter and determined to get well and that is why I'm posting this again, in the hope of maintaining her ongoing treatment at STEPS.

Amy left Winchester University with a first class honours degree in primary education.  But as she was entering her 3rd year of teaching at Rugby Free primary School, in December 2017, something happened that changed Amy's  life dramatically. 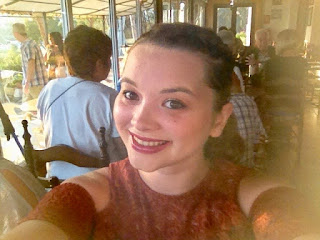 Amy has spent the majority of her time since then in hospital, recently in a neurological ward at University Hospital Coventry and Warwickshire (UHCW).  She has no use in her left hand and suffers constant pain in that arm, neither can she use her legs.  She is unable to sit unsupported, and suffers from Post Traumatic Distress Disorder (PTSD) too.

UHCW was unable to offer any treatment other than maintaining her general health, but the side effects of her illness have caused her condition to deteriorate and without specialist care would continue to do so.

Following extensive research by everyone in the family it was decided that a new clinic which had opened a couple of years earlier might be able to offer Amy a chance to recover and she was transferred to STEPS Rehabilitation, Sheffield.  It looks as though it will prove to be a turning point in her path towards recovery.  This transfer was made possible by some limited Government funding thanks to huge pressure from Amy's family and her local Member of Parliament (MP) Mark Pawsey.

STEPS provides a very comprehensive treatment regime 7 days a week and Amy is making steady progress. It is clear, however, that this is just the start of a long journey and at over £5000 per week, it certainly isn't cheap.

I started Amy's crowdfunding page to try to raise enough funds to pay for Amy's treatment and it has almost reached its target of £40,000. So many people have kindly donated money and we cannot sufficiently express our gratitude, but of course the money raised so far will run out before Amy's treatment has allowed her to stand by herself and walk again, so we implore all who read this to donate to her fund or share the campaign via your social media accounts.

Our daughter, Jo, (Amy's mother), was diagnosed with cancer (stage 4 non-hodgkins  lymphoma), which resulted in her being in UHCW at the same time as Amy.  After several months of the strongest chemo available and radiation therapy (because she was young enough to survive it!) she emerged thinner, weaker but in remission.  Jo and her husband Dave have devoted themselves to finding the latest information on dealing with Amy's condition, but finding time to visit Amy who is in Sheffield, about 100 miles away, puts an enormous strain on both of them while they continue to carry on with their demanding jobs.  We (my wife, Sandra and I) try to visit Amy as often as possible but because of her tough regime Amy cannot receive visitors until after seven in the evening.

Any donations no matter how small and/or sharing the web sites with the social media would be very much appreciated.

Here are the links to her web sites, the HelpAmy web site, HelpAmy

Thanks to all of you for reading this.