You might think there cannot be any connection of interest to us, between Bessler’s wheel and the pyramids, but I will explained.

As many know I have remained stubbornly convinced that Bessler’s wheel had five mechanisms - I’m talking about his first wheels, both one-way wheels. I have also suggested that in other versions there may have been seven, nine and even eleven mechanisms.  In support of this conclusion I must point to the Maschinen Tractate (MT) drawings which include some anomalies in the numbering. See my article in www.theorffyreuscode.com, published 2009. 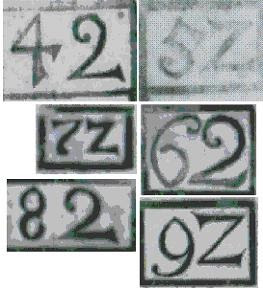 Bessler included the number of each illustration in his woodcuts. These are present up to and including number 104 They are of a similar style except for the numbers 52, 72, 92 and 102. In each of these cases the number two is drawn to look like a Z. All other examples of the letter two are shown in the usual curved style.  The angular number two may be intended to reflect the letter V twice, or in Roman numerals 55.

The ‘zed-like twos’ help to point to their accompanying partners, namely 50,70,90 and 100. The first and most obvious fact is that the number 5 is the first number to include the angular two. The only other numbers are the following odd numbers, 7 and 9. Why would this be done, I wondered. It seems to me that ever since I discovered the pentagon and the ubiquity of the number 5, that Bessler seemed to be suggesting that his wheel would not work with an even number of weights and that 5 was the ideal number. So 7 and 9 and even 11 mechanisms would also work but might be difficult to fit in to a wheel.

I also pointed out on the same website that MT137, the dodecagram or twelve pointed circle, also known as the circle of fifths because of its musical connotations, also contained a heptagram, or seventh circle. 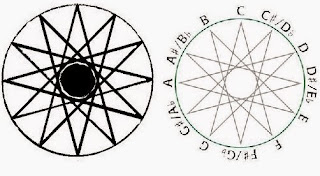 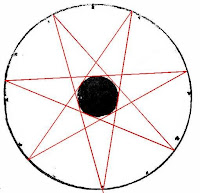 So there are circles of fifths, sevenths and twelfths.  Is there any more? Many years ago I was watching a TV documentary on the pyramids of Egypt.  The presenter described the so-called ‘bent’ pyramid of Dahshure, which was started at a too steep an angle and had to be modified to a shallower slope when it was about half built.  It is thought that it became unstable at the initial angle, which interestingly  was set at 54 degrees, and then modified to 43 degrees.

54 degrees was immediately recognisable; it forms the two base angles of one segment of a pentagram.  It means that the apex of the pyramid was intended to form an angle of 72 degrees.  So each of the four faces of the pyramid was intended to reflect one segment of a pentagram.  Seeing as this idea did not pan out well because of the problems in building a pyramid with a geometrical figure inherent in its design, I wondered how they got on with the great pyramid at Giza.

It has been established that this pyramid (Khufu’s) was built with sloping sides of  about 51.5 degrees. If the bottom two angles of a triangle are both 51.5 degrees, that give an apex of 77 degrees, which doesn’t make sense at first sight.  360 divided by 77 gives us 4.67 - nothing relevant springs to mind.  I wondered if they wanted to build a pyramid reflecting a heptagram, but that would necessitate a slope angle of about 64 degrees, which we know was too steep.

The slope is 51.5 giving the apex an angle of 77 degrees.  It stresses the importance of the number 7 by producing it twice, and a circle divided by 7 gives.....51.5 degrees at the top angle of the pentagram segment. Although the builders could not build a pyramid reflecting a heptagram, they cleverly pointed to the geometric figure even though it wasn’t actually there.  It demonstrated what they wished to convey - their skill in constructing buildings which either demonstrated geometric figures, or implied their presence figuratively, rather than failing and building a pyramid without this key ingredient.

The reason I introduced the pyramid theme, is because Bessler used a similar technique to hide information.  Without actually drawing it he pointed to its existence with subtle clues and we could then infer its presence, just as we can the pentagram at the bent pyramid and the heptagram in the great pyramid at Giza.

One more fascinating fact; the Great Giza pyramid at 481 feet, was the tallest building on the planet until 1360, when Lincoln cathedral in England was built. It’s spire originally reached 525 feet before it collapsed in a storm, many years later.