Many people have calculated the potential power of Bessler’s wheel and concluded that it wouldn’t amount to much, however I’m not convinced that this is true.

Consider the 70 lbs chest of stones lifted by the two-way wheels.  If you’ve ever physically lifted a 70 pound weight you’ll have a good idea how very heavy it is.  Most airlines have a limit for passenger luggage of 23 kg, which is 50 lbs; adding another 20 pounds to make 70 lbs would be as much as most people could manage to lift comfortably.  Bessler’s wheel routinely lifted it up and down from the castle yard several feet, probably more than 50 feet.

Professor Christian Wolff gave an account of his attendance at the Merseburg wheel examination. He wrote;

At the moment it can lift a weight of sixty pounds, but to achieve this the pulley had to be reduced more than four times, making the lifting quite slow."
The official certificate issued, described the weight as being seventy pounds and no mention was made of the four-fold pulley, I wonder if the reason for the use of the pulleys was, as Wolff commented, to slow down the lift to make it last longer, and extend the time of each demonstration. On the other hand the Kassel wheel was actually designed to rotate about half the speed of the Merseburg wheel, because it needed to run for four weeks or more.  It rotated slowly to save wear and tear.  It ran for 54 days before it was stopped.
If we take the Merseburg wheel for example, say the axle was six inches in diameter and the wheel turned at 40 rpm when under load, and the distance from the outside yard to roof, some fifty feet.  The circumference of the axle was close to 19 inches.  With the rope wrapped around the axle, one rotation lifted the chest of stones just over a foot and a half, fifty foot would take just over 30 seconds; not much of a demonstration. Using pulleys to reduce the load would also extend the time to perhaps a couple of minutes, just about long enough for all the spectators, of which there were said to be many crowded into the room, to view the lifting process, through the two windows.

There are several other considerations to bear in mind.  Firstly the demonstrations which showed the lifting task surely required some organising, and someone below in the castle yard to signal the lift could begin, or maybe Bessler had his brother Gottfried watching out of the window to say when the lift could begin. Was there slack in the rope attached to the axle or to chest of stones to reduce the effect of a sudden jerk?  Such a jerk could dismount the wheel from its supports if it was too strong. A rope loosely wrapped around the axle, two or three times would allow the axle to begin to rotate, while slipping the rope. Once the wheel was turning, a gentle pull on the rope would cause it to begin to grip the axle as it turned, thus beginning to wind up the chest of stones. Relaxing the rope as the chest neared the top would be more difficult, but perhaps a brake was applied to bring the wheel to a stop.

The pulleys would make lifting heavy loads easier and last longer. Bessler was a showman, and a slow lift with a very heavy load would be more interesting to the spectators.  It could not be helped if the pulleys conveyed the impression that the wheel was not as powerful as it actually was.  It was showtime and Bessler was a consummate master of ceremonies!

This blog is based on a draft version I wrote a couple of years ago and I’ve added a few illustrations to help my explanations.  It’s more o... 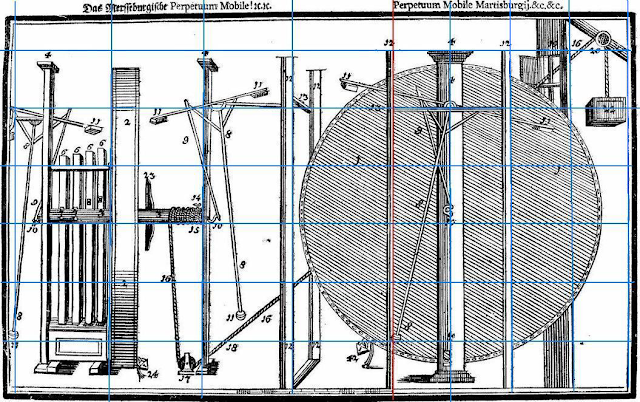