The weights on Bessler's wheel describe a path similar to the letter 'R'.

I noted a comment on the besslerwheel forum by jim_mich, while I was away in Spain, that I had at one time espoused a belief that the movement of the weights in Bessler's wheel followed the path shown in the avatar, I use on the forum, the Yin Yang symbol.  I used to think the weights moved on a path similar to the double curve which runs across the middle of the circle.  It's true that I did cherish this idea for a time and indeed I discussed it in my book 'Perpetual Motion; An Ancient Mystery Solved'.  But I came to the same conclusion that Jim did, that there was no way to incorporate such a design within any of the wheels I was working on, and I no longer subscribe to this idea and have not done so for some time because conflicting evidence appeared to suggest another design altogether.

People must be aware of other 'coded' information I have discussed and in particular the alphabetic substition of Bessler's name and his adoption of two extra forenames.  (see www.theorffyreuscode.com) He was born Elias Bessler and added the Johann Ernst at some point before he became famous, so that E. Bessler became JEE Bessler.  Given the alphabetic substitution to turn Bessler into Orffyre and thence to Orffyreus, I pointed out that JEE became WRR.

I assumed that he simply fancied the name Johann and with alphabetic substitution, the inital letter gave him the useful 'W', and the equally valuable 'E' gave him the 'R' and that, it seems to me must have been of equal importance since he incorporated it in every logo he signed all his letters with .  I reproduce two examples of the logo below so that you can see it.  I am convinced that the letter 'R' mimics the paths of the weights but it has to be interpreted correctly, which I believe I have done.  So there is your clue for today. 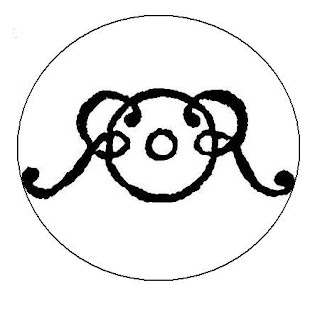