I had considered posting the subject of this blog on the forum but decided against because of its length.  I have no objection to anyone taking the suject to the forum for further discussion.

Many years ago I commented on what I described as the poorly drawn hands in the main portrait of Bessler.  I wrote this because to me the hands looked unnatural and were therefore not well drawn. Subsequently I believed that I had discovered that the particular arrangement of the middle and ring finger being pressed together while the other fingers were held apart was a secret method of recognition among the Freemasons mainly in formal portraits.  I thought that this was probably not too surprising given the apparent involvement of Karl the Landgrave in the Masonic brotherhood. The subject of Freemasons has come up from time to time and suggestions have been made that perhaps Bessler was a Mason.   If the house of Hess at Kassel was deeply involved in Freemasonry then there is little doubt that Bessler was either made aware of it, or learned of it while he stayed at Hessen-Kassel.

Coincidentally the man to whom Baron Fischer wrote, in support of Bessler's wheel, Dr Desaguliers, Sir Isaac Newton's curator of experiments at the Royal Society, was, himself a keen Freemason and was mainly responsible for the upsurge in membership all over Europe. However further research indicates that Desaguliers was not connected with Freemasonry until 1719 and did not induct anyone on the continent before 1731 so I think we can dismiss any connection of Bessler to Freemasonry, at least while he was at Hess-Kassel.   Neither is there any evidence that Karl the Landgrave of Hess-Kassel was a member and anyway, it was too early for his involvement, although several of his descendants were.

As for Ken's findings on the subject of Bessler's portraits, I am neither supporting nor dismissing his work on deciphering the meanings he claims to have found - I simply don't know..

In the main portrait Bessler's middle and ring fingers on his left hand, are held close together and anyone who wishes to research the significance of this in a formal portrait will find a wealth of information about the use of this symbol by the Masonic fraternity.  But I think we can ignore that information for the reason I have given above, so why was it used in his case? 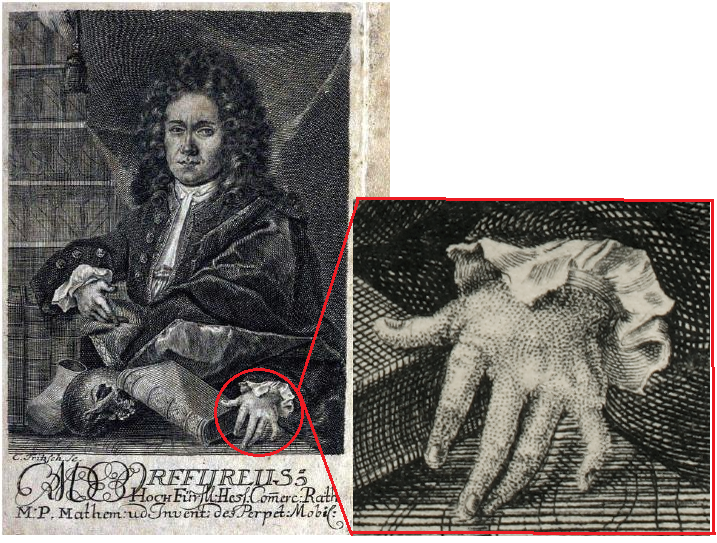 The symbols shown in the portrait; the skull, book and jar are commonly used in art to denote the passing of time and our ultimate death and the words Memento Mori are ascribed to the notion.  It means remember, we die.  In my web site at http://www.theorffyreuscode.com/html/part_2_portrait.html I suggested a link to Mary Magdalene, Venus and the pentagram, which I admitted was highly dubious speculation.  In fact the answer is more prosaic.  I think that in addition to the alphanumeric cipher, as described on my website www.theorffyreuscode.com the two Roman letter 'M's in the bottom line below the portrait stand for Memento Mori. 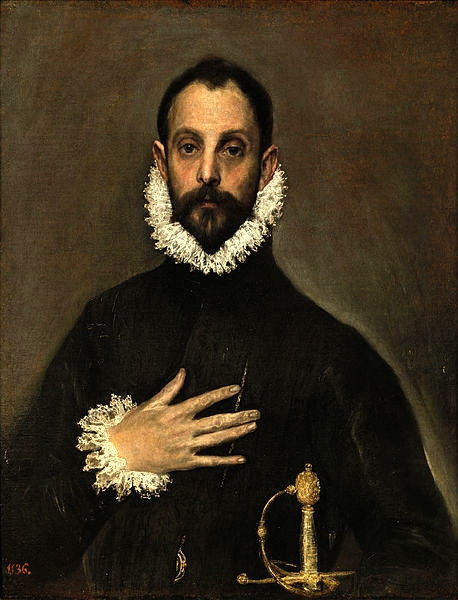 But that still doesn't explain why Bessler used the curious finger gesture.  Around the year 1578 in Toledo or Madrid, Spain, the painter known as "El Greco", created a painting that is now called "El caballero de la mano al pecho" -- "The man with his hand on his chest."  In this painting the fingers , of his right hand are displayed as in Bessler's portrait except that Bessler has them resting on a book.  Space prevents me going into detail  about the various speculations about its meaning, but you can read a good review of the painting and its associated ideas at http://www.darkfiber.com/pz/chapter1.html

I should also point out that dozens of famous, and infamous people have had portraits done in which their fingers have adopted similar positions including Newton and Hitler, some are obviously accidental due to the position of their hands against their hip or leg..

My own take from this with regard to Bessler is this.  We know that in later life he published documents arguing for the unification of the Christian religions. I assume he included Catholic, Protestant, Jews and the Jesuits.  He spent a period of time in Prague meeting frequently with a Jesuit priest and Jewish Rabbi, and I suspect that it was there that he learned of the the hand gesture which is a type of Jewish secret sign that was used among the crypto-Jews (i.e., false Christians) of 16th century Toledo to recognize each other, much like a secret masonic handshake.  Bessler's gesture may originate from there, or another theory has it that the gesture was recommended by St. Ignatius Loyola, founder of the Society of Jesus, the Jesuits, in his Spiritual Exercises? There are also a number of paintings showing the virgin Mary using the same gesture while feeding the baby Jesus   The problem with all of these is that they place the hand on the chest or breasts as in the above picture.

I can imagine that Bessler might choose to use the Marrano gesture as it is called, but why not place it on his chest?  It looks to me as though his left arm originally came diagonally towards his chest ending up either with the hand at his chest or near to it.  The current left hand looks almost like a disembodied part simply placed there at the last moment.  Perhaps he intended to place it on his chest and then changed it at the last moment.  I wondered if the reason for his change of heart (pun!) was due to the fact that Loyola required that the sign be made against the chest for each sin the believer had committed, and I doubt that Bessler would have wanted such a public display of his sins.

I should also mention that there is a medical condition which causes a similar positioning of the fingers and as an alternative, the ancient art of dactylonomy may require a similar finger positioning, although I haven't been able find that precise one!