Despite including several drawings illustrating his wheel (although external views only) in his publications, Grundlicher Berchicht, Apologia Poetica and Das Triuphirende, most people have seized upon his unpublished work which I have called his Maschinen Tractate (MT) (although there is no such title contained within its pages) to try to find answers to the Perpetual Motion (PM) machine. The MT contains 141 illustrations prepared for printing and some of the pages have handwritten comments attached to them.  But there is a note on the first page which warns the reader that he, Bessler, has destroyed or hidden any that show the workings of his wheel.  He does stress that careful study of the remaining drawings could lead someone with a perceptive intelligence to find the solution.

Many people have taken this to mean that a careful study of every page is necessary to find the answers, but in my opinion, Bessler would not have included serious information in all 141 drawings or even some of them, which were completed over a considerable length of time.  But also he would have had no idea that an arrest charge was imminent and therefore he would have had no time to add numerous drawings done painstakingly on wooden blocks for printing.  I'm sure his original intention was to conclude the MT with an explanation of how his wheel worked, but due to the possibility of imminent arrest he removed those particular pages and replaced them with an illustration on paper. The page which I called "the Toys" page is numbered 138, 139, 140 and 141.  This is the only page with more than one page number, therefore I think it is only necessary to study that single page.  The fact that it includes four page numbers suggests that it replaces those original four pages, the ones showing how his wheel worked.

It is true that there are hints at othe hidden information within the preceeding 137 pages and perhaps he did insert pointers to additonal information but it is my belief that these little clues pointed to the some small features within his concept, not intended to convey the complete picture.  If we assume that his MT was designed to be a tool for teaching his apprentices at his planned school then these small inclusions might have been there to raise points of discussion within his anticipated classroom.

So the 'Toys' page may well hold some important information that while not providing the full picture, might prompt us in the right direction.  One other picture, MT 137, appears to be prepared for printing might have been added as additional clue.  You can read my hypothesis about this page on my web site at www.theorffyreuscode.com :-
http://www.theorffyreuscode.com./html/mt_137_a.html
Check out pages '2' and '3' too for the full picture.

Note the drawings below include the original MT137 and below it,  how to construct MT 137 taken from the web site linked above, and if you have read the above link you will know that I have always worked on the assumption that there were five mechanisms.  There are several supporting clues which also point to the same number. 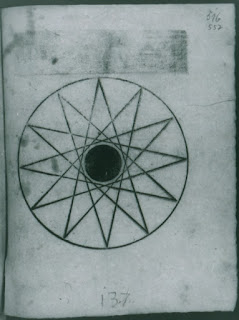 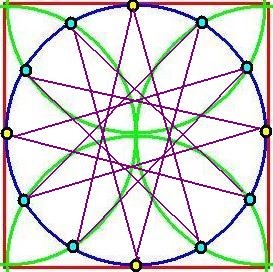 In the 'Toys' drawing below I have divided the drawing into five sections.  I used the figure marked 'A' to guide me and included one of five pairs of depictions; one straight vertical and one pair of verticals in each division.  In the 'Toys' drawing there are five letters, A, B, C, D  and E - note that, five letters.  An apparently hastily added sketch of  a spinning top is labelled '5', not 'F' to follow 'E'.  and he calls it '5', not '6'.  Weird?  Or is he trying to tell us something? 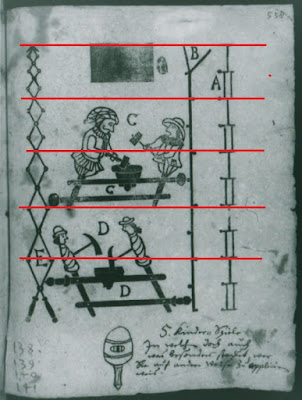 Splitting the drawings into five parts reveals some information.  In each division in 'A', you can see, drawn vertically, two uprights surmounted by a single one.. They bear a striking resemblance to the figures labelled 'C' and 'D', which are shown horizontally.  But why two 'C' and 'D's?  I think only one hammer is needed in 'C' plus the parallel rods.  The same in 'D' but the hammer used is rotated around the other way to point outwards or to the left.

The item marked 'E' is the storks-bill, lazy tongs, scissor jacks or whatever you prefer to call them.  Item '5' is a spinning top, just in case no one makes the connection that this is all about a rotating device.  I won't explain item 'B' as it would require too much extra explanation here, but obviously it has a connection with item 'A'. But I will show its meaning later this year, when I've checked a couple of things out first.

Lastly the text is hard to read at item '5' but has been variously translated :-

" 5. Children's game in which there is something extraordinary for anyone who knows how to apply them in a different way."

Mike, my translator had several goes at it and came to the conclusion that his version was right, but who knows?