Wisdom of the Aged

I was going to call this post Wisdom of the Ages, but then found that it had too many connections with what I regard as aberrant philosophies, so I thought Wisdom of the Aged might sum up my tentative conclusions better.

Are there any young people searching for the solution to Bessler’s wheel? I ask this because I note that on the few occasions that a comment reveals the author’s age, some are even older than I!

I’m 74, nearing 75.  I wonder if this subject has been so thoroughly denounced by experts that it doesn’t even raise a question in the minds of the young.  I say ‘young’  to include anyone who is, perhaps only half way to retirement age.

I think it would interesting if commenters would like to state their age when they comment, just the once, so that I could establish some idea of the age range of those who are still curious about Bessler’s wheel.  You could do it anonymously.

On the subject of age, I’m amazed at how fast the time has flown by; my web site at http://www.besslerswheel.com/ was published in 2010;

I decided to set up those later web sites when I realised that I had done all this work, I but didn’t want to share all of it before I had something that actually worked.  I had spent about ten years working on these subjects before I decided to share some of  my ideas, yet here we are, another ten years later and still nothing to show for it. There is stuff I won’t share because I still believe I have the solution, (and it won’t be lost if something should prevent me from finishing or publishing the rest). So ten years have passed and more since I did most of the work and yet here we are approaching 2020 and no sign of success yet 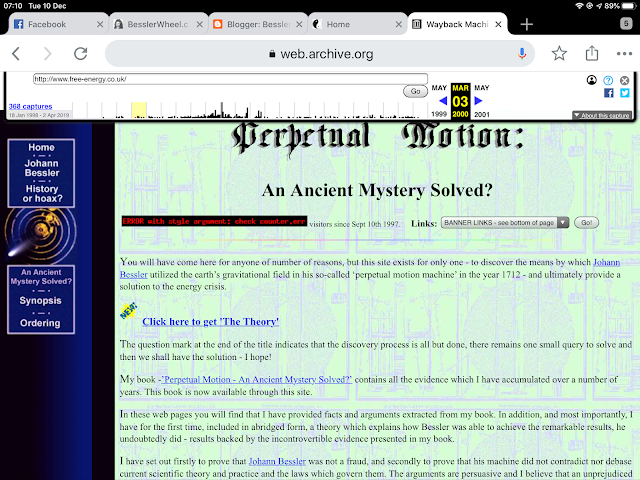 First published in 1997! I can’t believe I’ve been on the internet for all these years, and I’m still chasing this phantom, mirage or ghost....... call it what you will.  Twenty-three years on and I’m still confident of success!  Forgive the naivety of the website, (and perhaps myself), I struggled through a steep learning curve at that time, learning how to self-publish, write web sites etc. Not that I’m much better now!  Still struggling with computers.