Wheel update and an awsome trebuchet.

Well I'm still moving stuff out and getting rid of accumulated trash from thirty years! Still unable to work on my new wheel, but as soon as I can I'll be back!  Since I have little to report about my wheel work, I thought I'd go off at a bit of a tangent here. 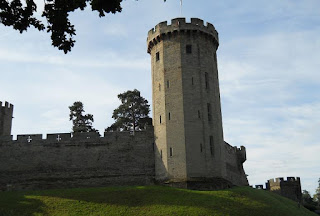 I'm almost ashamed to admit that I've lived here, near Warwick, for over 30 years and yet until this week I had never visited one of the finest castles in England - Warwick castle - and it's just two and half miles from my house. Begun almost a thousand years ago, it's an amazing place and well worth the visit. But for me the best thing is, they have this huge medieval trebuchet that has to be seen to be believed.

It's not the biggest one around 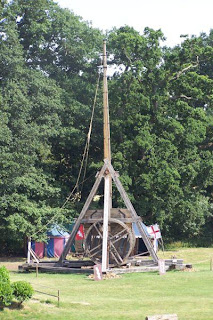 , but its still impressive.  It weighs in at 22 tons, measures 20 feet in height if you include the throwing arm and can hurl a missile 75 feet high and a thousand feet distant. It takes a small team of 4 or 5 guys walking in a giant hamster wheel at least 15 minutes just to wind up the massive block of sandstone which supplies the power. To be close by when it fires is awsome! This particular one - and they have others - was designed and built by Dr Peter Vemming from The Mediaeval Centre in Nykobing, Denmark, using notes and drawings from the 13th century, so it seems to be pretty authentic. I think that if they could design and build such a truly inspiring machine more than seven hundred years ago, they certainly had the know-how and the ability to built a puny gravitywheel without any problem. But of course they didn't know how! And neither do we ....yet!

There are other equally robust machines at the castle, and you can tell just by looking at them that they can unleash some fearsome energy and are just waiting for the chance!  This one I haven't seen fired yet but it just looks cool.  I'm sure that the builders of these amazing machines would have been able to build a giant gravitywheel had they known how and I can imagine something with say a twenty foot diameter being turned by heavy stone balls, able to pump thousands of gallons of water, or even raise the twenty ton rock in the trebuchet. 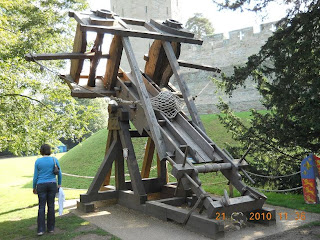 Anyway I shall give some updates here as soon as I have begun work on my wheel - and as always, confidence remains high.  I am still utterly convinced that 'kiiking' holds the solution, although I'm aware that most people think I'm way off target.  In the end only the proof of principle demonstrated in a working model will convince the world.

Mean while I shall keep the image of the trebuchet in mind to both inspire me and remind me what people could accomplish seven hundred years ago, here on this tired old island.