In November 2001 I drove to Germany to see Kassel and the other places nearbye which featured so much in Bessler's life. In Furstenberg I saw Bessler's wndmill. In Karlshafen I visited Bessler's house and also the antiquarian bookshop which is close to where Bessler lived after leaving Kassel. There I found a copy of the famous Das Triumphirende Perpetuum Mobile Orffyreanum and I was unable to resist the temptation to buy it. 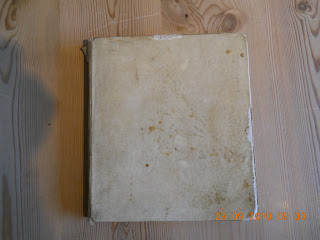 Back in my hotel room I examined the book carefully and found that it had two portraits inside the front cover; one of  Bessler himself and the other of an anonymous person. I say anonymous because Bessler had carefully cut out the face on the second portrait and aligned his portrait so carefully that his own face filled the cut out perfectly. The reason for doing this is difficult to determine but I presumed that it had to do with the different items included in each portrait.  Subsequently I learned that there are probably no more than three other copies in existence with this unusual feature.
There are one or two which may include the one portrait but the double one is rare, and this must add value to the book. Inside the front cover, just after the double portraits, my copy has a label attached which reads "Ex Libris Emmy Destinn".  She was a renowned Czech operatic soprano (26 February 1878 – 28 January 1930). Destinn was born Emílie Pavlína Venceslava Kittlová. She was very versatile and besides being a singer was a poet, novelist and playwright, though nothing she has done in other professions has rivalled her reputation as a singer. She performed in Paris, London and New York many times. She is buried in Prague. Why she owned a copy of Bessler's book I have no idea but her ownership of the book can only add to the provenance and thus its value. I hesitate to add that my own part in its history can scarcely lower its intrinsic value.

The time has come for me to let it go - albeit with extreme reluctance. The book has been treated with care and has been handled by very few people other than myself, it is however a delicate object and should be kept in optimum conditions, something I am unable to guarantee. With this in mind I am offering it for sale to the highest bidder, and there is no particular time limit on the availability of this sale.

Bearing in mind the approaching 300th anniversary of the 6th June 1712 when Bessler first exhibited his wheel, and the current sale of the windmill he was building and from which he fell to his death, there is likely to be some public interest in the inventor at that time and it is not beyond the realms of possibility that someone may finally succeed in reconstructing Bessler's wheel. Given the convergence of these factors at this moment, the timing could not be better for a dramatic increase in the value of this book and is one of the reasons why I am still loath to put it up for sale. 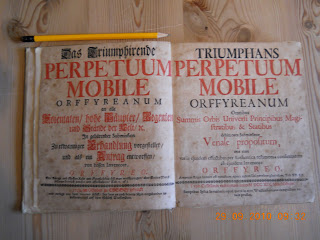 I am tempted to set a price but I won't, preferring to receive offers and give all due consideration to each. I will say just this; very recently I was in negotiations on behalf of another person who wished to purchase the only other copy currently available. This copy lacked the portraits but a price of £3000 was agreed before the seller withdrew from the sale, preferring to hold onto his copy for a few more years, mainly because he didn't wish to part with it and I guess also in the hope of making a substantial profit on his investment.

I have placed further information at http://www.orffyreus.net/ , so if anyone is interested in obtaining this book or just to ask questions about it please let me know by email or through the BW forum
JC