Size need be no object.

I don't know why some people believe that Bessler's wheel would prove to be too weak to produce sufficient energy to be of any practical use.

Take a look at this project, http://www.rarenergia.com.br/ 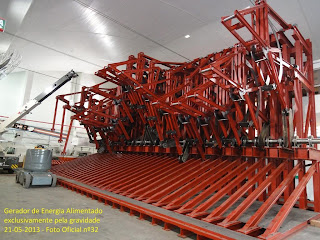 It is huge!  The two brothers, Ribeiro, from Brazil have been in touch with me from time to time over many years, but when I saw their latest venture I had to rethink my ideas about the size of Bessler's wheel and how big it would have in order to be really useful. I have no idea of the value of their project but seeeing the pictures of it got me thinking and when I considered the sizes of various energy devices throughout history, I realised that Bessler's wheel could be whatever size it needed to be to produce useful electricity.

John Rowley designed and built a new tidal wheel to pump water to Windsor Castle, from the river Thames, nearly three hundred years ago. I quote from the records 'John Rowley, master of mechanicks, for making a dam before and behind the engine, for clearing the old foundation, for setting down a new frame,  for the new wheel of twenty-four foot diameter and twelve foot broad; for the new brass engine with brasses to the crank, forcing rods and a new crank etc' . OK it's just a tidal wheel for pumping water, but the size was not a deterrent, even 300 years ago.

Newcomen's engine had an enormous beam, over 20 foot long in some instances, and capable of pumping hundreds of gallon of water a minute, albeit using an excessive amount of coal,and it was incredibly inefficient.  But making it big enough was not a problem, even three hundred years ago

More recently, Aldo Costa's wheel - about 60 feetr in diameter - is huge and of doubtful use for energy, but the size did not deter him and he wished to build one of over 150 feet in diameter! 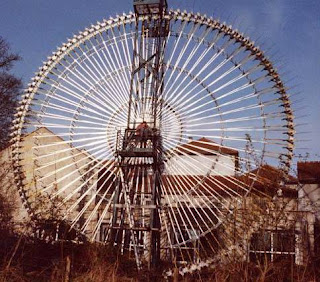 My point is this.... if Bessler's wheel produces any energy at all .....then it can be scaled up to produce a useful amount of energy, and if the size of the Kassel wheel could only produce a small amount of electricity then the wheel could be made big enough to do the job required.

Karl the Landgrave wrote that , 'He [Bessler] has no doubt that once the sale of the machine has been accomplished, a much bigger machine can be built provided that more space is made available and more assistants employed.'

Bessler himself suggested that it should be possible to construct a machine over 35-40 feet in diameter and there is no reason why several such machine could not be supported on the same axle.  If size is limitless then so is the potential power it could generate.