Before you begin, let me say, this is largely speculative! 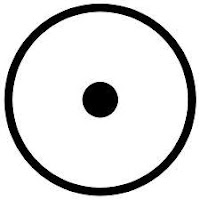 A circumpunct is a circle with a dot or point in its centre. Bessler used it in place of the letter 'O' in Orffyreus, in almost all of his abbreviated signatures as well as many of his full ones.  The above two are typical examples.  I used to think that it was his own invention and simply represented his wheel, however in the last couple of years I have begun to think there is more to its presence than I had originally thought.  It was, as is the case with every little personal addition of Bessler's, deliberate, planned and with a double meaning.

The circumpunct symbol has a long history and has represented the sun,  and was the hieroglyphic for the the Egyptian God, Ra.  As a nazar it was believed to protect against the evil eye.  It was the Alchemical symbol for Gold.  Its use dates back to the Hebrews and Egypt and for all I know further back.  It was used by Dan Brown in his book, 'The Lost Symbol', and interestingly has links to Freemasonry, where it was used as the symbol of an Entered Apprentice. This title refers to a junior member of the Freemasons and might apply to Bessler, but for what purpose I do not know. He might have been pointing to some kind of code system used by the Freemasons.  However, I'm not convinced that he was an accredited member, even if he was familiar with much of their history and methods; although he seems to hint at the square and compass in his drawings and of course they are crudely represented on the plaque at Carlshafen, bearing his image. Two of the three famous Rosicrucian Manifestos were published in Kassel and it was always recognised as a centre of Freemasonry and I'm sure that Bessler learned quickly all he could about the subject, given his propensity for doing so in other areas of interest.  I note that in the Masonic Lodge, the emblem is associated with St. John the Baptist and St. John the Evangelist, whose feast days fall on the summer and winter solstices.

In Cabbalistic mysticism, it represented the archangel Michael, - and it is related to the monad, which is a whole new can of worms.

To the Pythagoreans, the point and circle represented eternity, whose “centre is everywhere and the circumference nowhere.” This symbol was used by the Greek philosophers to represent the point of the beginning of creation. From this symbol they evolved towards the additional rules of creation including the Golden Ratio.

There is one other possible connection and that points straight to Francis Bacon and his bilateral cipher. This alphabet clearly shows the circumpunct and if Bessler was familar with Bacon's work as well as the symbol he would have thought it perfect for use in his signature, both as a link to his wheel but also, possibly, as a link, potentially, to his use of the bilateral code. 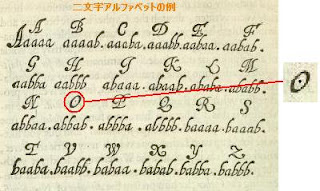 and here, just for my own amusement is my name, suitably embellished;