I should think everyone's heard of reciprocating engines, but put simply, each employs a means of converting rotary motion into linear motion or the reverse - using pistons and cranks for instance.  Although they achieved their pinnacle of achievment in the steam engines a couple of hundred years ago, they are used extensively today - and were also used by the Romans;  an early known example of rotary to reciprocating motion can be found in a number of Roman saw mills dating to the 3rd to 6th century AD, in which a crank and connecting rod mechanism converted the rotary motion of the waterwheel into the linear movement of the saw blades.  So it seems to me that we are seeking to convert the fall of a weight, linear motion, to make a wheel rotate, rotary motion.  Perhaps there are clues to be found by studying these ancient techniques and combining them with parametric oscillation, swinging or Kiiking, to achieve the impossible! 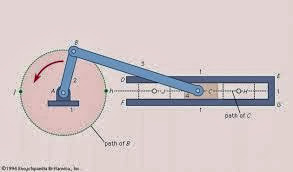 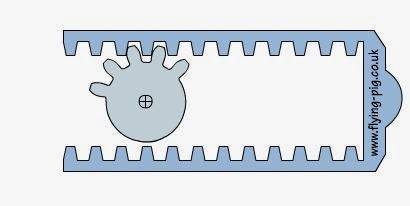 I just included a couple of images, (see above) but there are many more but all include linear  and rotary motion.

So in place of the piston and its up and down movement, we need the weight to move up and down.  We have the down-movement powered by gravity, but we also seek to raise it through gravity, - that's not so easy.  One might think that the flywheel effect might contribute to the rotation but it doesn't because the force of gravity which provided the initial force to turn it has been used up.  In a combustion engine the force is continuous and more than enough to get the flywheel spinning faster and faster. However in Bessler's wheel the force is provided by weights working in pairs and perhaps one of them falls into an outer position thus overbalancing the wheel, and subsequently the second weight falls into a neutral position therefore having no effect on the balance of the wheel, but in doing so moves the first weight back to its starting position?

We know that in all seriousness we cannot expect the single second weight to lift the first weight upwards more than a fraction of its fall, but we can imagine it being able to just tip the first weight over sufficiently to begin the process again - can't we?  Picture a bicycle wheel spinning.  To keep it going requires a light flick of your finger on the top of it to accelerate it or just keep it spinning.  Or a hoop and stick; you just keep tapping it forward and it rolls along  All we need to do is get the second weight to push the first weight over that small hill which represents the loss due to friction/work between start and finish of each rotation.

or to put it another way.