I know that most will be aware of this discovery, but just as an introduction to some codes I've deciphered I'm starting with my first real advance, which was the discovery of the pentagram in Bessler's drawing of his wheel in Gruendlicher Bericht and again in Das Triumphans.  The picture below comes from  my own copy of Das Triumphans and the one below that shows how I found the pentagon. 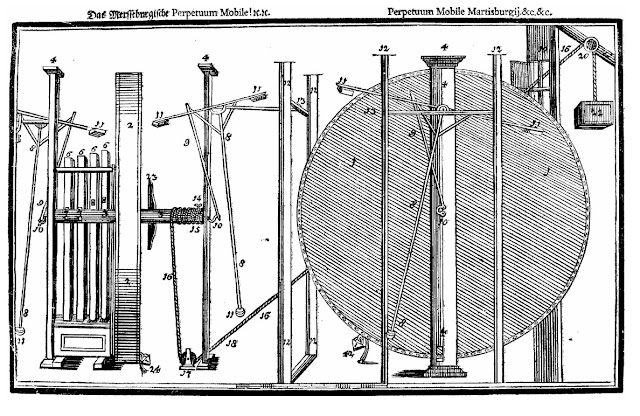 In the next drawing note the coloured lines.  The red line traces the path of the rope as it passes behind the wheel on its way from the pulley on the floor up to the window.

The green line is drawn from the wheel's centre of rotation perpendicular to the red line grazing the edge of a weight on the left end of the 'T' bar and terminating at the period which immediately follows the double x's above the top line. 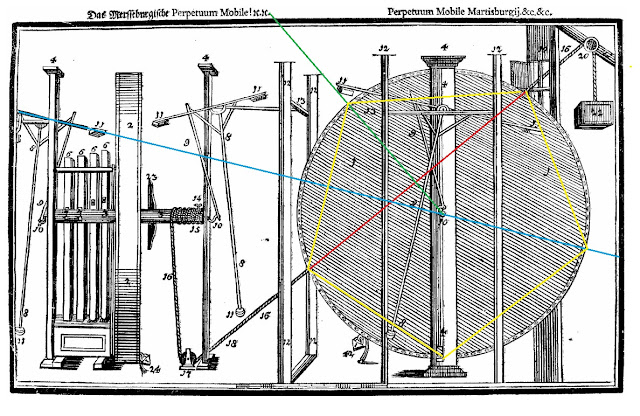 The fact hat the pentagon is so obviously intentional does add weight to my contention that there is much more hidden information to be discovered and decoded.

So we have a pentagon; so what?  More will be revealed following subsequent explanation of more codes within the same drawing and it will be seen that there is a perfectly sound reason for the inclusion of this particular geometric design, one that has a mechanical importance.  There is no need to summon the assistance of the 'golden mean' or any of the other mystical sciences.