Some more on Bessler's Codes

I've decided to share here, some more of the pieces of  Johann Bessler's coded information which I've discovered from time to time. For brevity I am reducing my explanations, just pointing out my findings and conclusions. The really detailed information is in my book which is steadily progressing and will be published in due course. 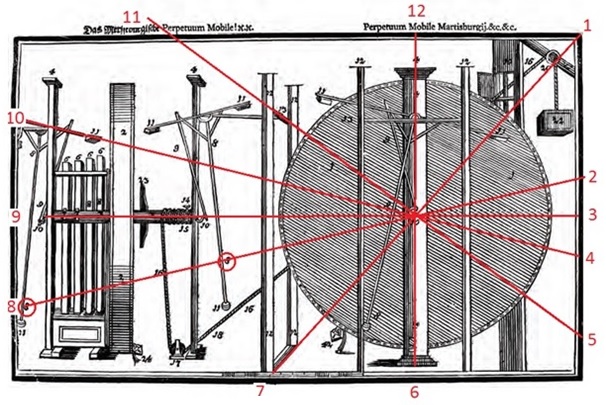 I put this clock up here last year but here's another chance to study it along with a little extra information.
Notice that the lines of perspective are as you would expect, all centred on the point of rotation.  I noted that there appeared to be a single gap in an otherwise fairly symetrical arrangment of lines.  I became curious when I noted that the two weights numbered 8 seemed to be on an alignment which passed through the centre of rotation but for which there was no perspective alignment available

The number eight figures seemed to me to be just on a line where you might expect an eight o'clock line to be.  Then I realised that when this line was added there were just twelve lines and made the logical conclusion that they must represent a clock.

Obviously I questioned the point of this inclusion and managed to relate it to another piece information. There appear to be a surplus of numbering in all of Bessler's drawings and this led me to the conclusion that the numbers might be designed to add up to a significant total.  This, as it turned out was correct.  I had already investigated the atbash route, converting numbers to letters, hoping to find a hidden text message but there was none. But the numbers in the above drawing total 660 and  660 divided by twelve (from the clock) comes to 55.   What is the relevance of the number 55?

Chapter 55 of his Apologia Poetica contains the mysterious Declaration of Faith, which also includes 141 Bible references which you can read more about in my web site http://www.orffyreus.net/
There I have shown the existence of a long and detailed code, but so far no one has to my knowledge deciphered it yet. I think that the number 55 had a dual purpose, firstly it related to his machine, and secondly it pointed to the largest piece encoded text.  The other hints at this number are numerous and I'll point out some of them in the next few weeks, but if you want to know Bessler's secret then you need to decipher the part of Chapter 55 I have described in the above web site.

PS As promised in comments, I include picture of the designs at the foot of page 128 on Apologia Poetica.  Do the represent Fibonacci spirals?

And below is a rough copy of the preface to MT, I assume you meany this and not the actual preface?