Following a suggested topic for my blog I have decided to offer my current thinking on Besslers one-way and two-way wheels.


Briefly, when Bessler first exhibited his first two perpetual motion machines, or ‘wheels’ as most of us tend to call them, he was accused of tricking his audience with a device which required winding up.  Proving that this was not true presented  a problem.

One idea which he  took from Leibniz and arranged was the two month endurance test under lock and key and guard, but he needed something more immediate.  His idea was to try to make the wheel able to turn in either direction, and I think he decided to build a wheel with mirror image mechanisms which would be capable of turning the wheel in either direction.

In order to test the feasibility of this idea I constructed a model of a Savonius windmill which has a vertical axle.  This is analagous to Bessler's wheel although using a different force.  Thus the wind blows horizontally turning the windmill in one direction.  The Savonius rotor consists of two or three or more scoops. Looking down on the rotor from above, a two-scoop machine would look like an "S" shape in cross section. Because of the curvature, the scoops experience less drag when moving against the wind than when moving with the wind.  Anemometers, used for measuring wind speed,  are also similar in design, although some have three and four scoops. 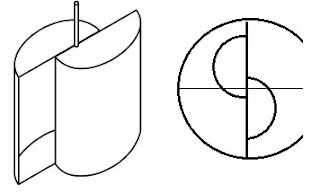 Having built the test model I made it spin by placing a fan nearby.  Once I had tested my model, I placed another Savonius rotor on top of the first on the same vertical axle.  This one was a mirror image of the first and designed to turn in the opposite direction.

Once placed in the path of the wind from the fan, both windmills turned in opposite directions at the same time, on the same axle.  The next thing was to link the two windmills so that they could only rotate together, in the same direction.

In a Savonius windmill the concave surface has higher resistance to the wind than it’s opposite blade which presents a convex surface.  With two opposing surfaces facing the wind there is balance with neither giving way to the wind.  But when you give the assembly a push what happens?

The backwards turning mirror image mechanism has resistance on both blades, whereas the opposite, forwards turning other mirror image mechanism, has none on one blade and limited resistance on the other blade. The side which moves with the wind has its convex side moving against the wind while it’s concave moves with the wind.  But the opposite side that moves against the wind is resistant as well - both concave and convex.

So in my opinion Bessler tested that theory in the same way as I did, with a Savonius rotor. Of course Savonius hadn't invented his design then, but we know that Bessler was familiar with the concept because the windmill he fell to his death from was a vertical axle windmill.  There are some vertical axis windmill still functioning in Iran believed to be at least 1000 years of age (panemones), and for several centuries vertical axis windmills were also in use in China and Egypt..  It's possible that Bessler saw one in Italy during his travels, or even England, or Ireland.