In my last blog we looked at the illustration from DT, which I maintain, held a hidden pentagram.  There have been doubts expressed about the figure. Some think it is just a coincidence and any geometric figure could be found, other believe it is badly formed and has unequal chords.


I have placed a corrected pentagram below. Notice where the red line first crosses the lower left rim of the wheel.  Follow the yellow hatching line which begins where the red line first crosses the rim of the wheel, to the right side of the bottom of the main supporting pillar. Next, mark the exact middle of the red line within the circle, and draw a perpendicular line (green) from the centre of rotation upwards through the mark, to the period or full stop on the title line above the drawing. 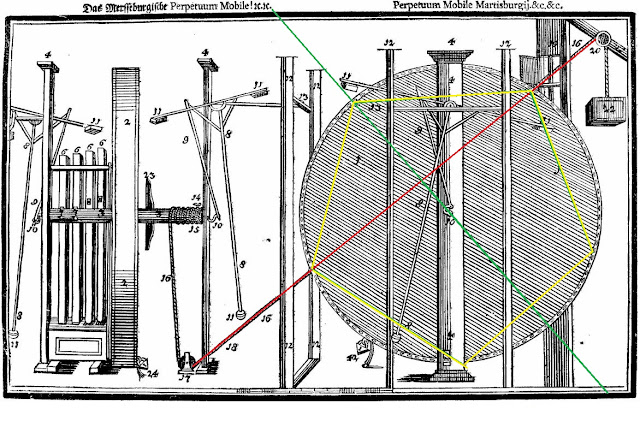 The blue line which I included in the previous blog is an error for which apologise.  The illustration I used is just one among many I have, and I used the wrong one!  The pendulum still has its upper almost horizontal chord in the same place and the reason for that will become clear, yes it is deliberate. 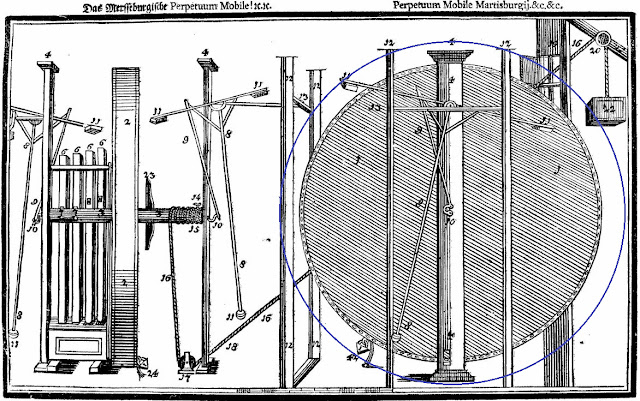 Using a set of compasses, place the point on the centre of rotation and set the pencil on the top of one of the two number 12s.  There is room for variation but the important detail is to include the number 11 weight on the left end of the cross bar on the pendulum, and the point on the padlock. The reasons for this will be explained in a later blog.

I will also explain the meaning of the other two (green circled) number 12s in my next blog.