Accidentally deleted this one!  Trying to get the comments back.....

Here is the second of my Bessler code interpretations.


The first thing I realised many years ago is that if Bessler was serious about leaving clues for people he would have to use drawings to hide his information. Maschinen Tractate (M.T.) was never published, plus he had left suggestions that answers could be found in both Apologia Poetica (AP) and Das Triumphirende (D.T.)


On the frontispiece of his collection of drawings (M.T.) he scrawled a message, “ NB. May 1, 1733. Due to the arrest, I burned and buried all papers that prove the possibility. However, I have left all demonstrations and experiments, since it would be difficult for anybody to see or learn anything about a perpetual motion from them or to decide whether there was any truth in them because no illustration by itself contains a description of the motion; however, taking various illustrations together and combining them with a discerning mind, it will indeed be possible to look for a movement and, finally to find one in them."


This message has been routinely misunderstood, in my opinion. When he mentions ‘taking various illustrations together’, etc, he is not just talking about the drawings in M.T., he is including the other drawings in GB, AP, and DT. I wrote a blog about this on Wednesday, 15 November 2017, entitled ‘Johann Bessler’s drawings hold the key’. There are other instances where I have pointed out the sources I have found useful in interpreting information among Bessler’s works; one blog dated 8th June 2019 list several other examples.


In the beginning I thought that the illustrations in both Grundlicher Bericht (G.B.) and D.T. were unnecessary. I assumed they were added to make his books a bit more interesting, but then I began to examine them in more detail and discovered the pentagram. The drawing which is from DT has been shown at the top of this blog for a long time.


To save space I shall try to limit the number of drawings I include, and also my interpretation of the clues will be brief as I’ve already almost completed a book about them and I don’t want to repeat that lengthy process with each page.  There are more than fifty clues interpreted and it’s  ok in book form, but there are too many illustrations to post here.  I apologise for this but time is limited and I’m sure you will understand the clues.  I am including some in this blog, see below. This first illustration will turn out to be the most important of all Bessler’s illustrations. It will become a most highly esteemed work of art mixed with mechanical engineering, once people begin to appreciate the huge amount of information which is hidden within. See below. 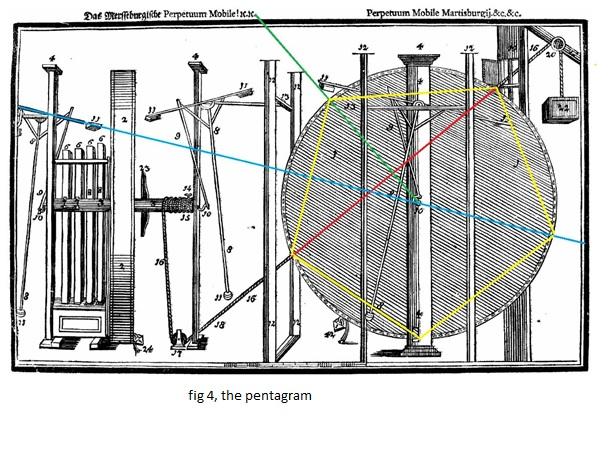 In the drawing above, the red line follows the path of the rope which passes behind the wheel. A second line, green, is drawn from the centre of the wheel at right angles to the first line. It terminates at the full stop, or period after the second ‘x’ or etc, in the title line at the top of the picture. It grazes the top of one of the pillars numbered 12, and the edge of one of the weights on the left end of the crossbar on the T shaped pendulum. The two ends of the red line and the point on the circumference of the wheel where the green, second line, the perpendicular one, crosses it, mark three of the points of a pentagram. The remaining points, in yellow, are easy to find. Note that the hatching lines on the wheel align with the lower left yellow chord of the pentagram. The blue line crossing from an alignment with the left side pendulum runs through the centre of the wheel and crosses the right side of the wheel to mark another point on the pentagram. The bottom of the main pillar completes the five markers.

The pentagram is not there as a symbol, it is designed to guide you into understanding the construction, but it requires additional help. This help involves the other illustrations in DT, and also there are some vital pieces of information embedded in the text of AP and DT. The Toys page in MT contains what I would describe as back-up clues which can only be seen to fit after you have solved most of the established clues.

More implications of the importance of the number 5 follow 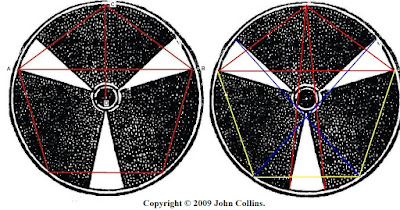 Above are two illustrations demonstrating two ways to find a pentagram in the AP wheel. In addition the three white segments measure 24 degrees, which divides into 360 degrees, 5 times. 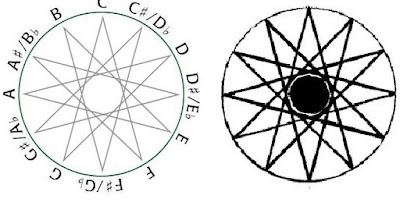 In the two drawings above the one on the right is MT137, but the one on the left is a modern version of design by Johann David Heinichen a contemporary of Bessler’s who lived in the same town at the same time, which he invented as an aid for musicians. It was known as a Circle of fifths