I’m currently getting ready to move house again so finding time to write my blogs and complete my work on Bessler’s wheel, is now too difficult.  Space to work is non-existent and I am staying with one of my daughters until we have chosen our next house.  This means no workshop until after we have moved!  But at least I will be able to continue my account of the codes and clues I’ve deciphered to date.

The comment facility is open to anyone so if you would like to make a comment please do so.  I may take a little longer to respond due to on-going house moving keeping me pre-occupied.

So in the mean time once more, here are the details about Johann Bessler aka Orffyreus and his amazing Perpetual Motion Machine.  Plus details of how to order his biography and his books which each include English translations.

The Legend of Bessler's wheel.

On 6th June, 1712, in Germany, Johann Bessler (also known by his pseudonym, Orffyreus) announced that after many years of failure, he had succeeded in designing and building a perpetual motion machine. For more than fourteen years he exhibited his machine and allowed people to thoroughly examine it. Following advice from the famous scientist, Gottfried Leibniz, who was able to examine the device, he devised a number of demonstrations and tests designed to prove the validity of his machine without giving away the secret of its design.

Karl the Landgrave of Hesse permitted Bessler to live, work and exhibit his machine at the prince's castle of Weissenstein. Karl was a man of unimpeachable reputation and he insisted on being allowed to verify the inventor's claims before he allowed Bessler to take up residence. This the inventor reluctantly agreed to and once he had examined the machine to his own satisfaction Karl authorised the publication of his approval of the machine. For several years Bessler was visited by numerous people of varying status, scientists, ministers and royalty. Several official examinations were carried out and each time the examiners concluded that the inventor's claims were genuine.

Over several years Karl aged and it was decided that the inventor should leave the castle and he was granted accommodation in the nearby town of Karlshafen. Despite the strong circumstantial evidence that his machine was genuine, Bessler failed to secure a sale and after more than thirty years he died in poverty. His death came after he fell from a windmill he had been commissioned to build. The windmill was an interesting design using a vertical axle which allowed it to benefit from winds from any directions.

He had asked for a huge sum of money for the secret of his perpetual motion machine, £20,000 which was an amount only affordable by kings and princes, and although many were interested, none were prepared to agree to the terms of the deal. Bessler required that he be given the money and the buyer take the machine without viewing the internal workings. Those who sought to purchase the wheel, for that was the form the machine took, insisted that they see the secret mechanism before they parted with the money. Bessler feared that once the design was known the buyers could simply walk away knowing how to build his machine and he would get nothing for his trouble.

I became curious about the legend of Bessler’s Wheel, while still in my teens, and have spent most of my life researching the life of Johann Bessler (I’m now 76).  I obtained copies of all his books and had them translated into English and self-published them, in the hope that either myself or someone else might solve the secret and present it to the world in this time of pollution, global warming and increasingly limited energy resources.

Not long after I was able to read the English translations of his books, I became convinced that Bessler had embedded a number of clues in his books.  These took the form of hints in the text, but also in a number of drawings he published.  Subsequently I found suggestions by the author that studying his books would reveal more information about his wheel.
For some ideas about Bessler’s code why not visit my web sites atwww.theorffyreuscode.com or see my work on his “Declaration of Faith” at http://www.orffyreus.net/
Also please view my video at https://www.youtube.com/watch?v=5BWVKtpuzn0
It gives a brief account both the legend and some more detail about some of the codes.

The problem of obtaining a fair reward for all his hard work was anticipated by Bessler and he took extraordinary measures to ensure that his secret was safe, but he encoded all the information needed to reconstruct the machine in a small number of books that he published. He implied that he was prepared to die without selling the secret and that he believed that posthumus acknowledgement was preferable to being robbed of his secret while he yet lived.
It has recently become clear that Bessler had a huge knowledge of the history of codes and adopted several completely different ones to disguise information within his publications. I have made considerable advances in deciphering his codes and I am confident that I have the complete design.
Johann Bessler published three books, and digital copies of these with English translations may be obtained from the links to the right of this blog. In addition there is a copy of his unpublished document containing some 141 drawings - and my own account of Bessler’s life is also available from the links. It is called "Perpetual Motion; An Ancient Mystery Solved?"
Bessler's three published books are entitled "Grundlicher Bericht", "Apologia Poetica" and "Das Triumphirende...". I have called Bessler's collection of 141 drawings Maschinen Tractate, but it was originally found in the form of a number of loosely collected drawings of perpetual motion designs. Many of these have handwritten notes attached and I have published the best English translation of them that I was able to get. Bessler never published these drawings but clearly intended to use them in his planned school for apprentices.
You can order copies of the books from my website at www.free-energy.co.uk
Or from the top of the right side panel under the heading ‘Bessler’s Books’.
There are also links lower down on the right side panel.
As I often say, the solution to this device is needed now.  Anything that might help cleanse the planet of pollution and help to reduce green house gas emissions, by providing a clean cheap alternative energy source should encouraged in its discovery and development to counter global warming.
Here are the drawings from Giuseppe Pelotti:- 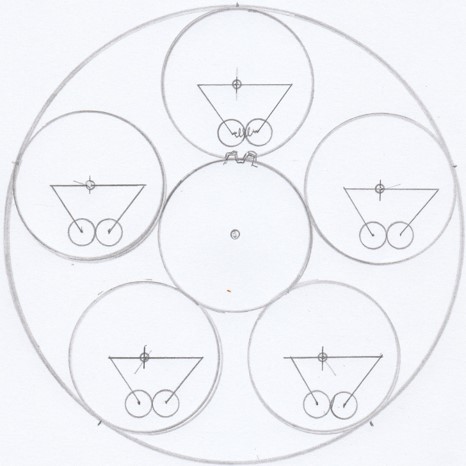