Johann Bessler and a Few Coincidences?

There seem to be some related features within Bessler’s documents which may be coincidental, or not - so I have tried to draw conclusions from them by assuming that they are deliberate.  I’m sure some will disagree but I think it worth pointing them out, just in case they were intended to catch our eye for some reason.

It’s sometimes easy to see things as coincidences rather than intentional occurrences.  For instance I like the fact that Bessler stresses the importance of the number 5, and 55.  My birthday is on the 5th day of month 2, obviously a coincidence, how could it be otherwise?  I was born in 1945, Bessler died in 1745 just another coincidence.  There is one more example which I’ll mention later.

The document I have always referred to as the “Toys” page is numbered MT 138, 139, 140 and 141.  This is logical as it follows MT 137. There are actually five drawings on the page lettered A B C D and E plus what appears to be a late addition of a hand drawn figure with the number 5 adjacent. So we appear to have four pages, apparently with five drawings labelled with letters plus one more number 5.

At first sight I believed the intention was to show that this page was intended to replace four others, destroyed or buried, after his arrest.  But this assumes that either he was charged but not imprisoned otherwise he might not have had time to prepare for searches or confiscation of his documents, so the charges he was accused of made him hurry to take precautions against such actions against him.  This is possible, but why would he need to remind himself of four pages buried or destroyed?

The total of 141 is interesting.  It seems as though he wanted to get to that number and not beyond, but numbering the ‘Toys’ page 138 would seem to have been good enough.  141 is not a prime number and it’s only factors are 3 times 47.  If we turn to MT 47 we discover that inserted within  the drawing which is numbered 47, another number 47, twice in fact because one is the mirror image of the other so there are three number 47s present on the page. Is this a pointer to the number 141 or the reverse or is it just a coincidence? 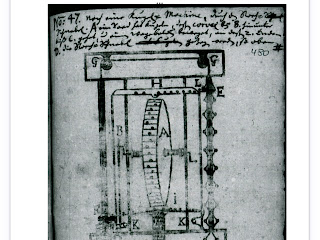 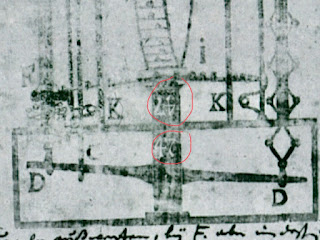 Bessler’s ‘Declaration of Faith’ which appears in his “Apologia Poetica” chapter 55, contains numerous Bible references, 141 to be precise.  So if we assume the same link as before, what is the relevance of the number 47?  The first thing which occurred to me was Euclid’s 47th proposition. Was Bessler drawing attention to it for some reason.

“In any right triangle, the sum of the squares of the two sides is equal to the square of the hypotenuse.” It’s also a 3, 4, 5 triangle, see below.  I’m sure I needn’t go into any detail about this, but the figure also relates to the Freemasons symbol as you can see further below. Maybe this was the connection he sought to hint at. 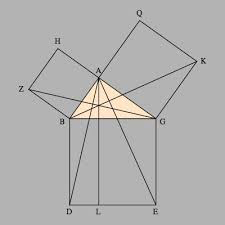 There other pointers to the Freemasons and I guess it’s up to people if they think the above is relevant.  But most likely, in my opinion it points to Pythagoras who is believed to be the originator of much of Euclid’s Propositions, and thus to geometry, which ties in with Bessler’s second portrait in his Das Triumphirende book (DT)
One other coincidence for now, which I wrote about in 2019.  I wrote “I have a copy of a document, a panegyric addressed to Karl annually, but it has something unique.  As many will know, Bessler was very fond of chronograms, which is a phrase or inscription in which letters such as M, D, C, X, L, I, W and V can be read as Roman numerals giving a date. He provides dozens and dozens of them in some of his documents and curious as they are, they don’t appear to hold any coded information.
This particular one includes the year.........2019! He also wrote them for 1519, 1619, 1719, 1819 and 1919.  But why 2019 and why did he stop,there? It could have been the year his solution was discovered - what a coincidence that would have been.  If it had, everyone would have believed that Bessler had somehow predicted the future, but it didn’t happen, and if it had, it would still be just a coincidence.
In my experience I find that Bessler added more clues, hints and implications as and when they occurred to him, consequently one often comes across new and exciting ‘coincidences’ seemingly added almost as an afterthought.
Of course the following is just  a happy coincidence, my new house which I hope to move into before the end of this month is numbered 47.  No!  I wouldn’t buy a house because I liked its number!  And I’m not into the Freemasonry.
JC
By John Collins at April 07, 2022