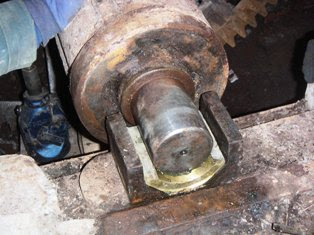 I think that discussions about the bearings on the forum have become too convoluted. There is nothing complex about them, in my opinion. If you have a load-bearing shaft rotating in a bearing shell, you have two components. The journal which is the end of the shaft, made of steel, iron or brass - and it rests in a bearing shell of a similar metal which, in Bessler's day, was filled with a thick grease, pig or goose fat or even bear grease. It is usually covered by the other half of the shell to protect it from ingress of dirt, which if it wasn't included, might add friction and thus wear to the moving parts. Bessler routinely removed the upper shell so that the spectators could examine and see that there was no possible external connection. The bearings (journals) were slightly tapered to control the axle's lateral movement and keep it centred within the shell.
This, from an account of the history of watermills. "Watermills utilised wooden axles and these generally had metal gudgeons held in place on the ends of the shafts using wedges and steel hoops, which allowed the wood axle to have a small metal tip on the end. These metal tips or 'journals' would then ride on an iron half-shell liberally greased with animal fat."
Finally this from wikipedia, "A plain bearing, or a friction bearing is the simplest type of bearing, comprising just a bearing surface and no rolling elements. Therefore the journal (i.e., the part of the shaft in contact with the bearing) slides over the bearing surface. The simplest example of a plain bearing is a shaft rotating in a hole."
There is only one place where the so-called 'curved' pieces which were said to extend outwards from the bearings on the end of the axle, are reported,and at is in Das Triumphirende - as per Stewart's translation which follows, 'They rest in their motion on two almost 1 inch thick, {am Ort} somewhat tapered steel pivots horizontal in the two sockets or bearings, [the pivots are] equipped with two curves, about which the rotary motion of the whole vertically suspended wheel can be somewhat modified by applying pendula on both sides, as the attached figures at the end of this treatise clearly show'. In other words there are no witness descriptions of these strange curved pieces because they never existed outside Bessler's imagination. He introduced them into Das Triumphirende for good reasons that I shall explain at a later date.