I returned from Rome on Thursday night having been invited to take part in an Italian documentary for RAI 2, a part of the government television network. The documentary is about Orffyreus or Bessler as we tend to refer to him. They have already filmed actors in period costume telling the basic story of Bessler and they wish to end it with an interview about him. The director had sent me a series of topics which they would ask me to comment on.

Bear in mind the questions were translated from Italian, so the phrasing is a little awkward.

What is the perpetual motion?
Can you describe the character traits of Orffyreus?
Can you describe the first Orffyreus’s wheel?
Can you give us an overview of the writings of Bessler? What do they contain? Are they logical and comprehensible to the eyes of whoever? What messages have you succeeded in deciphering? Describe how the name Orffyreus is fruit of a manipulation.
Which rivalries did Orffyreus’s increasing reputation raise up? And Who were the most persistent opponents of Orffyreus and what actions did they put into practice?
Can you tell us what happened in Merseburg?
Which tests were done on the wheel exhibited in Kassel after the 54 days of isolation?
Who was interested in the Orffyreus’s discovery following the exhibition in Kassel?
We would like also for you to comment on the following: many people are wondering how the world would be today, if the professor Gravesande had not yielded to the temptation to spy on the secret mechanism of the wheel of Orffyreus. Already, because this gesture, which proved inadequate to understand the essence of the mechanism of the wheel, determined the end of every possibility that the secret of the invention was finally released. Orffyreus, in fact, cannot tolerate such an insult. Went rapturously, and in a gesture of baleful wrath destroyed violently also his last creation under the bewildered eyes of those present.
The Royal Society dropped each contact believing that they were dealing with a madman and the Landgrave quickly found an excuse to remove that visitor now deemed unpredictable and dangerous.
Not difficult subjects for me to comment on and yet, sat in front of a two cameras, the director, a sound man, two cameramen, an interpreter and the director's assistant plus the two owners of the house where it was filmed.... I froze! I got it together on the third or fourth take for the first question though! They will send me a copy of the finished product when it's ready and it is budgeted to be finished by December 31st!
I added some additional information concerning the coded material but I don't know how much, if any, they will include as it wasn't in the original specification.
I've included some pictures for your amusement!
JC 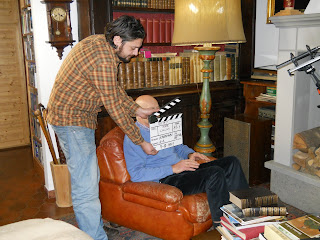 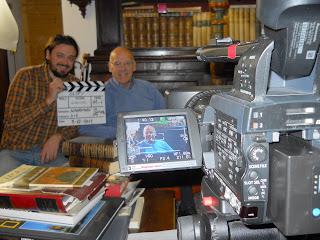 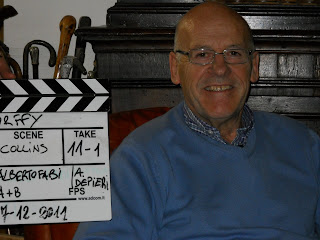