Bessler's Wheel - before and after him?

This observation was in my mind when I first wrote my account of Johann Bessler in my first book, "Perpetual Motion; An Ancient Mystery Solved?"  So I did some historical research to try to discover if there was any evidence that anyone had indeed made this discovery before.  I found plenty of accounts of people who had tried to find the solution, but no convincing evidence that they had succeeded.

Following this I  reasoned that perhaps the secret had been found in the ancient past, and it might be that although no written account of it survived, perhaps an image relating to the successful wheel could have survived in some form?  Perhaps as a sacred image or sign or symbol.  The most convincing image that I was able to find was the yin-yang symbol. I have briefly touched on this symbol before on this blog but a recent email I received has persuaded me to discuss it again.

I have used this symbol for many years as an avatar on the Besslerwheel forum because it seems to me to have some resonance with Bessler's wheel, although I don't think the yin-yang symbol bears any similarity to it.

Taijitu is another name for the same image and both originated in China and a rough English translation is “diagram of ultimate power”. The Taijitu is one of the oldest and best-known life symbols in the world. At its heart are the two poles of existence, which are opposite but complementary. The light, white Yang moving up blends into the dark, black Yin moving down. Yin and Yang are dependent opposing forces that flow in a natural cycle, always seeking balance.

Though they are opposing, they are not in opposition to one another. As part of the Tao, they are merely two aspects of a single reality. Each contains the seed of the other, which is why we see a black spot of Yin in the white Yang and vice versa. They do not merely replace each other but actually become each other through the constant flow of the universe.The image is designed to give the appearance of movement. The pattern is sometimes described as two fish swimming head to tail.

Curiously, patterns similar to the Taijitu also form part of Celtic, Etruscan and Roman iconography, where they are loosely referred to as yin yang symbols by modern scholars, however no relationship between these and the Chinese symbol has been established. 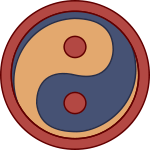 So by coincidence several different races from divers regions of the world have come up with an identical image and yet no connection has been established between them.  This curious coincidence implies a common beginning but did it originate from some archetypal imagery.  Wikipedia explains that 'an archetype is a universally understood symbol, term, statement, or pattern of behavior, a prototype upon which others are copied, patterned, or emulated. Archetypes are often used in myths and storytelling across different cultures.' 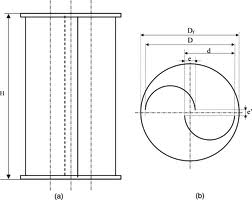 To my mind the design of the yin yang is so close to the design of the Savonius rotor that it begs the question, did the yin yang symbol derive from the Savonius rotor or vertical-axis wind turbine, and not some Pseudopsychology?  Maybe, but as for an image of the mechanism inside Bessler's wheel being found in some ancient artifact.....there is no evidence that it ever existed before or and definitely not, after his time.......so far.

Thanks a usual to wikipedia for the above information.