There are some assumptions regarding Bessler’s largest wheel and I  thought it might be interesting to reconsider the sounds coming from the 12 foot, 18 inch wheel at Kassel.

We have Fischer von Erlach’s excellent account of his two hour examination of the wheel, which he confirmed turned at 26 RPM when unloaded.  He described the sound of about eight weights landing on the side towards which the wheel turned in each revolution. This was a bi-directional wheel which could be started in either direction with a small push with just one finger in the desired direction. This brief push resulted in the wheel accelerating to its top speed within a few turns.

Imagine you are standing close to this wheel; it is 12 feet high and wide.  Your average house probably has 8 foot ceilings and maybe the room itself is only 12-foot wide, so this wheel is HUGE. You are counting the number of RPM, but you are also counting the number of heavy thumps you can hear for each turn.  Visualise in your mind that you are pointing your finger at the top of the wheel as it turns and follow it down to its lowest point in rotation and that takes 1 second.  You follow the same point on the wheel as it climbs upwards to the top starting point, another single second.  In each second you have to count 4 noises, 8 in a single turn of 2 seconds.

It’s not difficult to count 8 in 2 seconds, but it does convey the size and power being demonstrated in a way that might not be apparent to the casual acceptance of the facts.

You can hear what this sounds like if you go to ....
https://www.imusic-school.com/en/tools/online-metronome/ 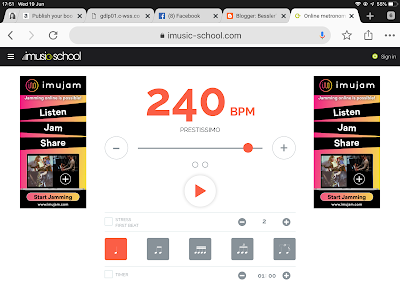 With  2 seconds per turn and 8 thumps per turn, you have 4 thumps  per second. Enter 4 times 60 to set the metronome at 240 per minute. This gives you an impression of the number of noises von Erlach could hear for each spin of the wheel. It provides a real time idea of the sound of the wheel.

It must have been a difficult task to identify which sounds had the same cause i.e., the sound of the landing weights, against a background of reversing mechanisms which were designed to turn the wheel the opposite way.  I know many people favour some kind of reversing mechanism rather than a mirrored one, but there must have been other sounds besides the ones von Erlach mentions.

I also favour the possibility that Bessler reduced some of the sounds by applying felt, something he admitted doing in earlier wheel’s. I wonder if there were any gaps discernible in the 8 sounds von Erlach heard?  He doesn’t mention any so I assume there weren’t any, but also Bessler could have  added fake sounds to confuse his visitors. In other words, although his report is a useful guide,  we  should not get too hung up on the 8 sounds he described.

This is just reminder to find a way to look with new eyes at the Kassel wheel.


And on another matter: