The Huge Potential in Bessler’s Wheel.

It was confirmed in writing on several occasions that Bessler’s wheel could lift a chest of stones weighting 70 pounds from the Kassel castle yard to the roof.  The Kassel wheel could turn in either direction at 26 rpm unloaded, and 20 rpm when lifting the heavy chest.  The Merseburg wheel could  perform a similar task and could achieve 50 rpm.  Given that Bessler said he could design wheels with different outputs, either in speed, lifting ability and/or size, and suggested running several wheels on one axle, I am convinced that the wheel could be modified, improved and made larger and would be a perfect electricity generator- despite all those who claim a poor output of no value.

For those who have tried to estimate the output of the wheels, in my opinion it’s a pointless task, because we have used the speed of two of the bidirectional wheels and they may have been slowed down by the counter-rotating ability.  How much weight each used, how many, how the two wheels differed in their design?  Yes we can make a rough estimate taking into account the weight of stones lifted, the speed of the lift, and the size of the axle and even the effect of the pulley system, but it is still a guess based on nothing else.

The truth is we simply don’t have any idea of the potential, but to me it seems blindingly obvious that such a machine capable of a simple demonstration of its lifting power could easily increase its lift capability by ten-fold by simply increasing its size and its internal weighting system. With the modern development techniques its efficiency could be increased by an unknown amount, but it would be considerable.

Whether an electric generator would be best suited for individual residences or a small group, or larger numbers only time will tell, but it will come.  ‘The three major categories of energy for electricity generation are fossil fuels (coal, natural gas, and petroleum), nuclear energy, and renewable energy sources. Most electricity is generated with steam turbines using fossil fuels, nuclear, biomass, geothermal, and solar thermal energy'.

Below is a picture of a modern steam turbine generator, powered by nuclear power.  It can be powered by fossil fuel such as coal, gas or oil. 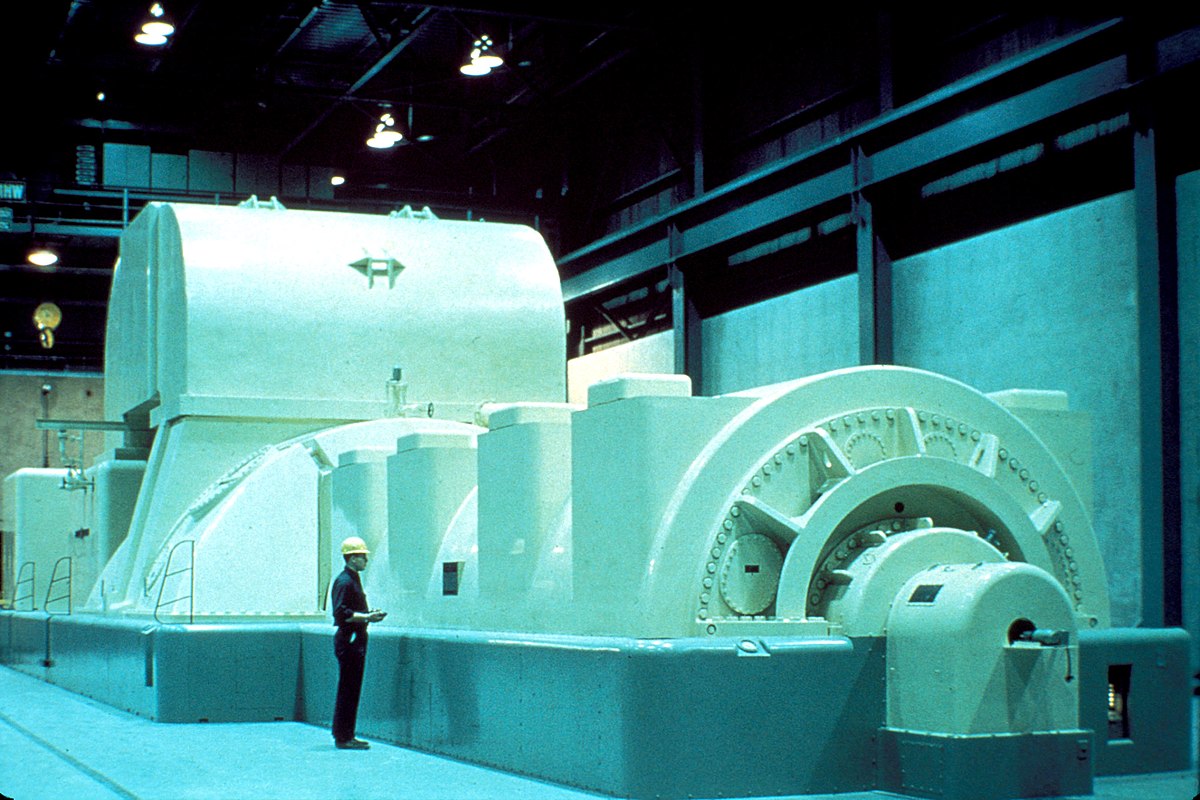 Note the size of the operator compared to the device.  I can easily imagine a giant Bessler wheel consisting of many wheels in series mounted on a single axle of a similar size.  A typical power plant such as the one above rotates at 1800 - 3600 rpm, over 100 times faster than Bessler's Kassel wheel when under load.  Does that rule it out?  No, because a modern windmill generator turns at 30 - 60 rpm.  It connects the low speed shaft to a high speed shaft via a gearbox and increases the rotational speed from 30 - 60 rotations per minute to about 1000-1800; this is the rpm speed required by most generators to produce electricity. The gear box is a costly and extremely heavy part of the wind turbine. but an essential one.

So Bessler's wheel would have to be big enough to increase its slow speed, say 50rpm, up to 1000 -1800 rpm, but given a gearbox similar to those in use in the windmills, I believe such a system could be adapted to a large Bessler wheel, or series.

The modern windmill generator, the GE 1.5 megawatt model, for example, consists of three blades, each 116 feet in length atop a 212 foot tower, giving a total height of 328 feet. and a total width of about over 200 feet!  Surely we could construct something closer to the size of the machine in the picture above which as a Bessler wheel could easily generate as much electricity but within a building and at a far cheaper cost, and with much greater reliability than the windmills?

Each 2MW windmill costs $3 - $4 million installed! Each gear box costs more than $150,000. There are around 1,200 incidents of gearbox failures reported each year – one failure per 145 turbines.  There are 341000 windmills to date and more coming on stream before the end of 2019.  In the GE 1.5-megawatt model, the nacelle alone weighs more than 56 tons, the blade assembly weighs more than 36 tons, and the tower itself weighs about 71 tons — a total weight of 164 tons.  The gearbox in the largest windmill generator weighs 86 tonnes it is the largest wind turbine gearbox ever built.

Windmills are reliant on the right wind speed, too strong and they're locked down, to weak and they won't turn.  When the gearbox fails it can take up two months for repair and costs are usually around $100,000.  It may use the wind to drive it but you can hardly call it free energy.

Bessler said his wheel would run winter and summer, rain or shine.