This is somewhat speculative, but an argument against the oft-stated opinion that Bessler’s wheel will  have little real power.

There have been several attempts to estimate the potential power in Bessler’s wheel, but given the paucity of information about the internal workings, we are limited to using the dimensions, speed and a single estimate of the relative mass of one weight.  Even the size of the chest of stones proves little, as we don’t know the limit that could be lifted.  There is another approach which might give some useful idea of the inherent potential in Bessler’s wheel.

There is a restaurant about a mile from here which straddles the river Avon,  called the Saxon mill, records indicate it was a working mill back in the twelfth century.  The first reference to a waterwheel goes back to 4000 BCE and there are the remains of several Roman water mills throughout England.  According to the Doomsday book in 1086 there were no less than 5624 water mills in England.


My idea was to compare the size and speed of the old water wheels used in the mills and also take a look at the current thinking (sorry, cheap pun!) about modern commercial and diy water mills and try to get assessments of power output from wheels of comparable size and speed to  the Merseburg wheel. I’m sure I don’t need to go into the different types of waterwheel, there is plenty about them on google.  There are several varieties each with their advantages. There is also much about efficiency of modern turbines, but that does not concern us just now.


Much of what follows is gleaned from reputable google websites.


Most of the Roman water wheels were vertical and measured between 5 and 10 feet in diameter, not too different from the size of the Merseburg wheel.  In 1764 the first water-powered cotton mill in the world was constructed in Lancashire.  Below is a picture of an early textile mill, from 1770.   Note the huge size of the wheel, and the gearing used. 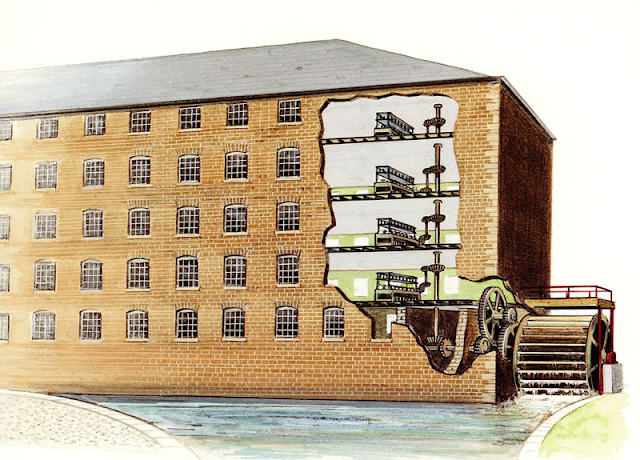 The principle challenge of the waterwheel is the low rotational speed, which means that significant gearing up is required to match generator speeds.  The same has been suggested as the problem with Bessler’s wheel. However high power gear units are widely available and have improved the economics of modern waterwheel power schemes up to 50kW and more. A 35kW generator is enough to power everything in a home. Water wheels are cumbersome and far less efficient than hydro turbines but the reason for this discussion is to try to get an idea of the kW output of a Merseburg size wheel.


The Merseburg wheel was about eleven feet in diameter and one foot thick and turned at 40-50 rpm. But the old water wheels turned much more slowly, 7 to 10 rpm was common.  The Lacey wheel on the Isle of Man is the largest working water wheel in the world. It is 72.5 feet in diameter and six feet wide.  It turns at just 3 rpm.  It has an estimated 200 horsepower which is about 150 kW. So back to the Merseburg wheel.

The speed and volume of water and height of its fall affects the power output of a waterwheel, but most can work from minimal amounts of each.


Eleven feet by one foot, turning at 40 rpm. Circumference is say, 35 feet. The rim is moving at 1400 feet per minute or almost 16 mph.  16mph is a strong breeze and if you were cycling at 16mph, you would feel it quite strongly.  How much power might be available from the Merseburg wheel?  No idea, actually because for one we don’t know how heavy the weights were, nor how many there were, but there is one thing we do know - the speed of the rim, 16 mph, and more when it turned 50 rpm, nearly 20 mph.


It reminds me of the feeling I had when I read the maid’s account of how she helped turn the Kassel wheel, I couldn’t prove she was lying, but I knew she was, and it’s the same here, the Merseburg had plenty of power and rotated at far higher speeds than any waterwheel.  Add high gearing and you could drive an electricity generator.  Bessler said his wheel could be scaled up providing more power, obviously this must be true, it’s a common solution to limited output in many machines.


I know, this is not scientific or practical or objective, but sometimes subjective feelings are all you have.


One more thing; there has been so much talk about Bessler’s use of pulleys to increase the lifting power of the wheel.  I have suggested that the slower Kassel wheel was deliberately designed to provide a slower demonstration, obviating the need for pulleys.  In the Merseburg demonstration, with an rpm of 40 or 50, each lift would have been over quickly.  We don’t have the height of the lift but it was described as ‘several Klafter’, each of which was six feet.  Several Klafter could be up to about 50 feet,  although I suspect less, which would use 100 turns of the wheel, and last less than two minutes.  Including the pulleys, extended the length of the demonstration.

The demonstrations took some organising and were observed by several people at a time.  Removing weights, translating the wheel, replacing the weights, making sure that as many people as possible could view the lifting process through the windows, plus of course, Bessler’s own brand of showmanship, would take time.  A lift of less than two minutes might even be missed by some and would be received with less interest and requests for several repeats.  The use of pulleys would help the demonstration.


NB. This, in my opinion, justifies the design of the Kassel wheel, which had two requirements.  Firstly it was needed to run slower for the demonstration, and secondly it had to be able to accomplish the lengthy endurance test. Bessler would have been aware of any wear on the Merseburg wheel bearings and made adjustments to the design of the Kassel wheel to slow it’s rotational speed without reducing its power.  If this assumption is not right, how else do you explain the slower Kassel wheel?  Don’t forget that Bessler stated that he could make wheels large or small with varying power output.

In my opinion Bessler’s wheel will prove to have more than enough power to provide useful amounts of electricity.