I’m going to share what I know about Bessler’s wheel and the design I’m building.  I will post the same on my blog as on the Besslerwheel forum, but the drawings and photos may be more accessible on the blog, but I’ll do my best to get them on both.

I’ve called the thread ‘‘Bessler Collins Gravity Wheel’ because it is based on my interpretations of the many Bessler clues, codes and hints he left.  I believe that the design is entirely his, hence his name first in the title of this thread, but my name is there too because these are my interpretations of the information I extracted from his works.  My wheel is not finished because there are difficulties in getting mechanisms perfect but I believe the theory is correct.  I hope there will be several attempts to simulate what I post here.

This is a brief explanation of some clues and where they are.  It has proved impractical to get this all down in one post but I will provide more detail as soon as I can get it written.  I will now describe some of the actions and mechanisms involved but I haven’t got the pictures ready yet, but will post them as soon as I can. I’ve added some at the end of this post which should go some way to supporting my claim to have found the secret of Bessler’s wheel.

In my blog on 4th November 2013 I posted my belief that all the information needed was to be found in the six drawings to be found in Bessler’s works Das Triumphirende (DT) and Gruendlicher Bericht (GT).  If you search my blog for word ‘drawings’ you will find more of the same information which I’m going to post here.

First I believe that the ‘T’ shaped pendulum shown in Bessler’s (DT) and (GT) is in fact ‘L’ shaped.  The two long arms of the pendulum show the starting and finishing positions of its range of action, but more on that later.

The wheel has a pentagram drawn on a disc or backplate to which everything is attached.  The five segments of the pentagram each contain one mechanism and its complete range of movement.  Although all the five mechanisms operate independently there are always two mechanisms working together.

The following description assumes that the wheel will turn clockwise. I include a colour reference to each lever for ease of reference for when the new pictures are posted.

Each mechanism includes two main levers and each has a weight on its end.  All the weights are of equal mass.  One lever, which I call the (red) initiator lever, is the one which starts the action. It could be thought of as the prime mover. Each lever’s pivot is positioned on a radius line.

The (red) initiator lever pivots roughly half way along the radius when the radius is at the six o’clock position.  The exact position of the pivot is simple to calculate from the information which follows.

It falls 90 degrees from a position approximately 18 degrees to the right of the vertical six o’clock radius line.  It lands close to the rim of the wheel, at an angle sloping downwards about 18 degrees.

The second lever in each mechanism, which I cleverly refer to as the (blue) ‘secondary’ lever, is attached to a pivot on the same six o’clock radius but it is positioned just below the centre of rotation (CoR).  This (blue) lever is the longest one, stretching all the way to the rim. It’s weight is attached to the end of the (blue) lever. When the (red) initiator lever falls it pushes the (blue) secondary lever and its weight, 30 degrees to the right from its position which also starts 18 degrees to the right from the vertical radius.

This lift reverses the action caused by the (red) initiator lever currently at the six o’clock position which pushes its own (blue) secondary lever anti-clockwise.

The clues which provided some of this information are all in the first drawing in (DT) and (GT).  There are  other helpful drawings which are in DT and in the Toys page in Maschinen Tractate (MT).

One of the written clues came from Apologia Poetica (AP) known as “The great craftsman” passage.  This is a heavily abbreviated version of what I published on my blog back in November 2017. The omitted pieces are indicated by several dots or  periods.

“What follows is my interpretation of the “great craftsman phrase”.  In his Apologia Poetica, Bessler included many clues…..

He wrote, “a great craftsman would be he who, as one pound falls a quarter, causes four pounds to shoot upwards four quarters.”  …….

Note that within the quote he mentions that there are five weights, one plus four, and each one is equal to one pound.  Secondly, one pound falls a quarter.  How do we define what he meant by a quarter? In this case he was referring to a clock - something he also included in the first drawings in both Grundlicher Bericht and Das Triumphirende - and a quarter of an hour or fifteen minutes covers 90 degrees…..

We saw in the first part that the word ‘quarter', referred to, not just 90 degrees but also to a clock.  In the second part the word ‘quarter' also refers to a clock but this time he has confused us by using the words ‘four quarters’. ‘Four quarter’s equals ‘one whole hour’.  Each hour on a clock is divided into 30 degrees, so the words ‘four quarters’ meaning ‘one hour’ as used here equals thirty degrees.  To paraphrase Bessler’s words, “a great craftsman would be he who, as one pound falls 90 degrees, causes each of the other four pounds to shoot upwards 30 degrees.”

You might also think it would have been better to have said that “one pound falls 90 degrees, causes one pound to shoot upwards 30 degrees”, but that would have removed the information that five weights, and therefore five mechanisms were involved, so it had to be four weights plus the one.

This 90 degree fall by the (red) initiator lever generates enough mechanical energy to drive three actions.  The first one causes the wheel to rotate 30 degrees; the second one moves the (blue) secondary lever 30 degrees anti-clockwise; the third one lifts the (blue) secondary lever in the preceding mechanism up 30 degrees.  The cost in mechanical advantage is spread unevenly between the three actions.  Clearly the swift lift is the most expensive.

These actions break the symmetry which has always prevented a successful reconstruction of Bessler’s wheel.

More information, clue interpretations and drawings to follow asap …. hopefully. Here are some illustrations to help the above explanation, BUT this is only half the picture! 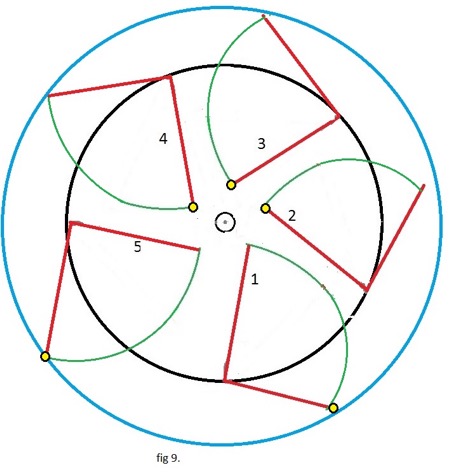 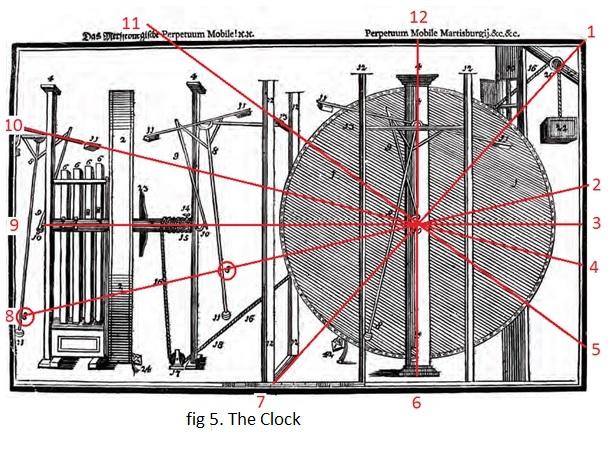 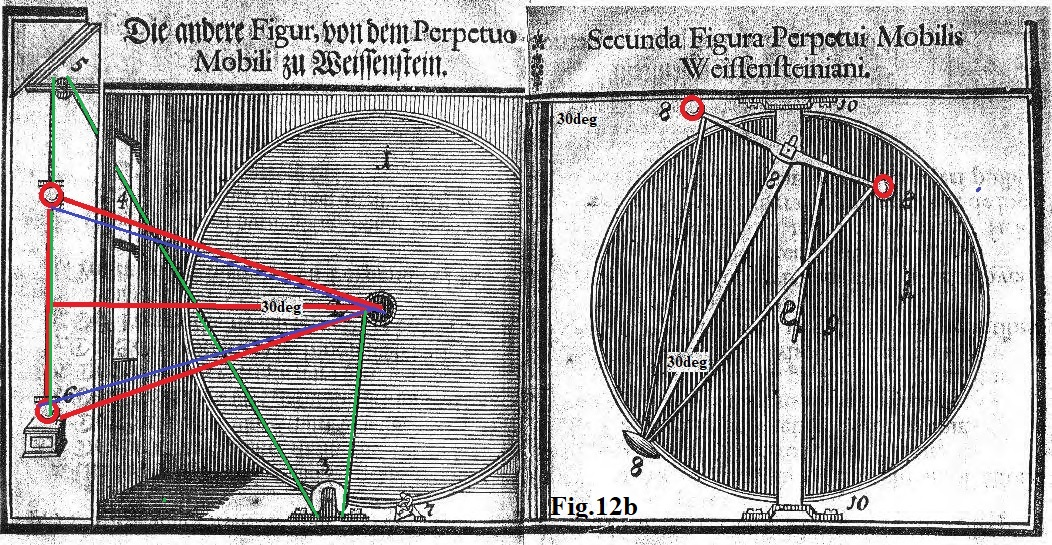 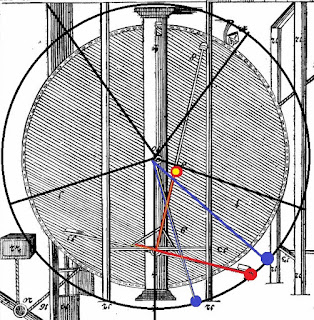