In Johann Bessler's Das Triumphirende (DT), he included a number of drawings, showing the external views of the wheels he built. Also he copied a cartoon published by one of his enemies, Borlach, commenting that 'they caused many copies of [this] scurrilous copper-engraving to be spread far and wide – quite contrary to all the admirable local laws against defamation of character'. And he copied, mockingly, a illustration of Christian Wagners's bratenwender, or roasting jack.

The first one depicting his wheel, shows the Merseburg wheel, complete with the mysterious pendulums whose appearance was not recorded by any of the witnesses.  The following four pages includes an explanation of the numbered parts shown in the diagram, in both Latin and German.

Immediately following this is the explanation of the lettered parts, also in both Latin and German, of the next diagram which shows the Weissenstein Castle wheel at Hesse Kassel.

There then follows a kind of double drawing of two views of the wheel, but instead of providing a list explaining the numbering of the various parts in the drawing, either in the preceeding pages or those following, Bessler has attached an explanatory list to the bottom of each half of the two drawing. The left one in German, the right in Latin..Those who have copies of the book DT, may not be aware of this oddity and I myself, attached no importance to it until a while back, I began to wonder if it was deliberate.  Why didn't he just put the list of parts on the following pages?  No reason that I could see.  The result is a complicated system of folded papers which get crumpled and torn when used too frequently, with each bottom part containing the list, folded upwards and tucked in between the two pages.  They are separated from each other in the lower portion but joined together where the illustrations are bound into the book..  There was no need for such a complicated arrangement.. 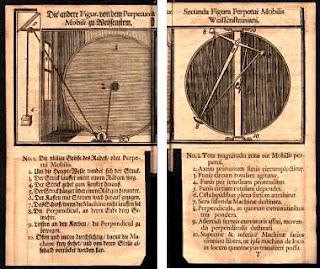 This double drawing has been discussed at length on the besslerwheel forum but the discussion centred on the apparent intention of the inventor, to draw attention to the two wheels shown, by slicing off the right edge in a way that suggested the two drawing should be merged, or at least pulled together in some way.  Upon reflection I consdered the possibility that it was the two lists attached underneath, that were to be considered together in some way.

The presence of the triangular padlock which was used a datum point for a 72 degree line in the Merseburg drawing (5 x 72 = 360 degrees) should make us suspicious of its presence in the left hand drawing in this case.  As a piece of speculation I have lined up the 'W' of Weissenstein, as Bessler's favourite fraktur version of the letter, a pair of overlapping 'V's, with another of his favourite Latin characters, the letter 'M' in the list below (a single 'V' between two uprights) and note how the padlock aligns perfectly. 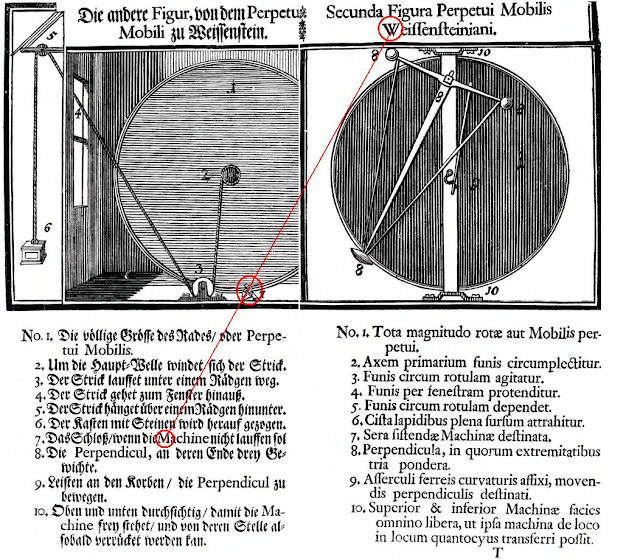 Notice that although there are other letter 'M's in the list, a line drawn from the exact centre of  the 'W' in Weissenstein and drawn through the exact centreof the point on the padlock, aligns perfectly with the centre of  just this 'M' and with one of its two sloping lines within its centre.

That letter 'M's is also a datum point and a carefully drawn line from it to a certain corner, plus another from the 'W' of Weissenstein, will reveal angles of 36, 54 and 72 degrees - those of the pentagram.   There is more of course but I leave it to your imaginations.  :).